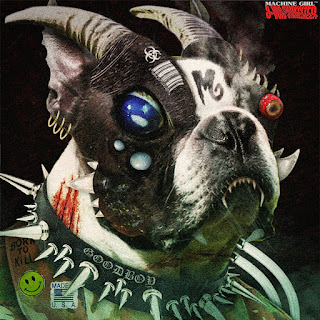 Prepare for bizarre. Imagine grind core done by Mindless Self Indulgence. Or a less heavy Igorrr. The vocals are spactic but so is pretty much every element of the opening track. Sometimes to the point of becoming noise. It makes my dog nervous. There is more punk like yelling to the second song, but aside from that and samples worked into this glitched out spasm of sound, it still sticks to what they did in the first song, though the vocals might serve more purpose for longer here. "On Coming" has more in commong with Street Sects, though less in the way of a post-punk vibe. In fact none of that at all. "Fortress Destroyer" is more of a interlude. This means what they do is enough like a song that you can differeniate when they are not making songs.

"Scroll of Sorrow" finds them shifting to more of an edm song, not far removed from Skinny Puppy does in recent years. "Splatter" is more like Death Grips. They are equally as angry on " Kill All Borders" . This anger is tempered with softer electronic sounds in an attempt to subvert the mood  on the song following this. It was a needed dynamic shift. Unique in appraoch, but the resulting over all sound is not as wildly original as they would like you to believe, thus the very easilly drawn comparisons I have already mentioned. That is not to say this is not an enjoyable liste, Even seven songs in I can tell this is not something I am going to be listening to on a regular as I already have music to fill this need.,

There is almost an industrial vibe to "Fully In It" . The chanted vocals at least hook you in., 'Suck Shit' is the kind of cyber punk temper tantrum you might expect by now. I will round this up to an 8. For what this is it is fun and a unique blend of things . Not going to make any top 10 lists this year, but a project to keep my ears open for to see where they go from here.