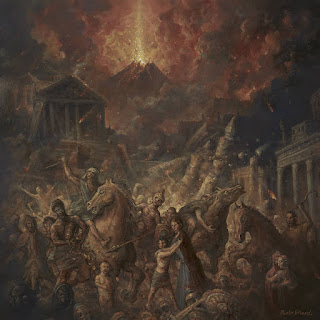 Well here is a weird doom album if we are really calling it doom, as in truth is it more progressive . I like dynamics . I also like singers that  give me a few vocals colors. King Diamond is one of my favorite singers so shifting registers is my shit. Here is it done in a very fashion. There is a dramatic Candlemass like voice. Belted from a chest register. It is well produced . Then there a higher Ian Gillian like voice that comes in. What is amazing is that the bass player Gianni Nepi who handles the vocals is 67 years old. Holy shit his voice has held up better than Bruce and Rob both. These guys are very progressive and while they have cool riffs, the melodies are more dramatic than they are catchy. I respect the hell out of how young and vibrant they sound . This proves age is really just a number .

It is funny because I often bring out how the egregore of where a bands comes from can influence their sound. The fact they are from Italy think is what brings a very operatic influence and a somewhat classical touch to their arrangements. I have noticed this in other Italian bands in the past but not to this extent. I am betting his falsetto was more piercing when he was younger . Right now they remind me a little of Pain of Salvation, but their song writing is not as tight. Some times he hits the notes in a better fashion than others. But he gets up there way more than a man his age normally would . I might rather hear him sing for Deep Purple than 75 year old Ian Gillian.  Oh gods yes , I just went down a Deep Purple Youtube rabbit hole, do not listen to anything after 2004.  The fourth song finds things getting the most interesting in terms of dynamics. "Gladitor" is more straight forward metal in the more Pain of Salvation direction.

There is a darker and somewhat heavier tone to the last song. The album is generally well produced. It is hard to imagine the youngest members of this band are in their early 40s . But the bulk of the core is over 60. The higher notes are a little iffy in places on this song. Overall thought this album is impressive if you are looking for a some what more traditional progressive metal album with the sensibility of opera. I will give it a 8.5.