My Top 10 Punk Albums of All Time 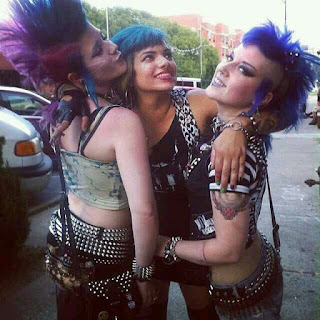 I am not saying these are the greatest or most essential punk albums of all time. Though if I made lists of the greatest or most essential punk albums of all time I am not sure this top ten would change much coming from me as these are the ten punk albums I have listened to the most. Obviously only 10 bands could make the list, if it was a top 20 then we would see bands like the Dead Kennedys  or Black Flag.  But only ten spots that could make the cut so here they are.
- 10-The Ramones - "Road to Ruin"
How could they not be on the list ?
9-G.B.H - "No Need to Panic" If you look punk up in the dictionary this should be the album pictured. 8- Fugazi- "Repeater" Yes, I like Minor Threat , I just like Fugazi better. 7-the Misfits - "Walk Among Us" I have friends that maked fun of this band and call them pop punk. Haters be hatin , but their 1982 debut is the real deal for sure. 6-Iceage- "You're Nothing" This band from Denmark si as every bit as legit as the so called classic punk bands . 4-Killing Joke - "s/t" They might be more on the post- punk side of punk, but this is my list so I am going to count them ! 3- New Model Army - "Vengence" This 1984 debut, is rooted in rock n roll , but still has a punk sneer to it. They just happen to be better songwriters than their peers at the time shouting 'one two three go..." 3- the Stooges - " Raw Power" Almost more rock n roll than punk, but I am putting it on here anyway. 2- Cro-mags- "Age of Quarrel' If I had to only own one hard core album this would be it. 1- Christian Death - "Only Theater of Pain" Singer Rozz Williams says they are punks who like Halloween , so this album counts at punk and for 1982 fits the bill more than what kids think of today in a post- Blink 182 world.
Posted by Wilcifer at 6:35 PM