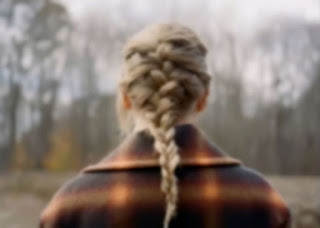 Rolling Stone were idiots enough to call this Swift's goth folk phase. Sadly there are people even stupider than whoever wrote that and will believe it. This is a more introspective second chapter to what she started with "Folklore" which came out back in July. The vocals are in ethereal layers . The first vocals that has some pop meat to them and beat that moves is "Gold Rush". When comparing it to " Folklore" this is the first song that holds up against her vocal performance from this album. Not that there is anything wrong with the dreamy vibe to the first two songs, I am not sure they work of what are her strongest qualities. They are still solid songs for what they are . What they are happens to drift more like a ballad.

I suspect these songs are leftovers from the "Folklore" sessions.  "Tis the Damn Season" does weave smart vocal melodies around a more indie rock instrumentation. "Tolerate it" I had to listen to a few times before it sunk in. The beat is really low in the mix, forcing the song to rely on the floating vocals  This is almost like her "Lionheart" mainly piano oriented ballads. I am not sure what I was expect from a collaboration with HAIM, but is more country than I expected. I fine with that as the song has great lyrics and moves well. The vocals carry most of the groove. I think it one of the album's stronger songs. With the hiding the cheating husband's body theme it sounds like there is some Dixie Chicks influence. "Happiness' works off with a limited instrumental arrangement.

"Dorothea' has the kind of care free piano playing that could almost be on a Tori Amos album. The mood shifts to a more serious tone with here collaboration with the National. I like chorus of "IVY" the verses are not as focused . They are not bad , but when it comes to Taylor her vocal lines are normally immaculate in construction. The second verse does flow better. It might just be a better of this growing on me. I this is maybe the 3rd time I have listened to this album. There is still traces of county left in her DNA . You can hear them most clearly on "Cowboy like me" .  "Long Story Short" is one of the few returns to more familiar pop sounds. "Marjorie" almost get's lost in it's own ambiance.  When this album is referred to as experimental I suppose they are referring to her playing around with the phrasing on songs like "Closure' which is far from what we here consider avant garde. Not the strongest chorus on the album. This album is not on the same tier as "Folklore' but  not a long way off, The duet she did with Bon Iver is better than what she does here. Some of that has to do with the role he plays . He sang in his lower register on 'Folklore" here it is closure to what you expect from him. I will give this one a 9.5, so a half point down from "Folklore's" perfect score. Just because it is not perfect doesn't it is not great on it's own.