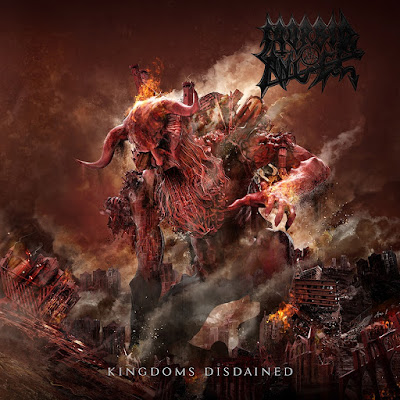 The more I read going into this album the more my hopes sank. I knew Steve Tucker did some shit ass tour where they did not play any of the David Vincent songs...yes, that's right nothing from the first four albums which are some of the best death metal album ever recorded. My inner 15 year old hoped perhaps Vincent would be back and they would redeem themselves for making "Illud...", this is sadly not the case. Then there is drummer Pete Sandoval who became a christian and will not play with the band for that reason. Even then I hoped perhaps he would be like a child who finally realizes there is no Santa Claus and come to his senses. So far this has not happened to we have Scott Fuller from Annihilated. This leaves Trey as the only member of the band who played on the four classics.

So the question is will this album befall the same fate of the other Steve Tucker albums? Will they just sound like a run of the mill death metal band that Trey just happens to be playing guitar solos for? If you are into jerking off to guitar solos then this might not be as bad as it sounds. He does have a very distinctive style. If I am going to be honest he is one of the better metal guitarists still standing. On this album he continues to prove he is not only a great soloist , but a riff machine. The riffs sound like infernal tanks rolling over you when the double bass locks into them. However my first listen to this album found the songs all running together as the guitars have such a uniform sinew to them. Vocally Tucker is putting a little more into it this time around and trying to recreate a growl that is more impassioned not unlike those on "Blessed Are the Sick". But I will end the Vincent vs Tucker debate right now and say it's the personality in Vincent's voice that is Morbid Angel. He serves the songs more and has a more dynamic range, including his spoken or sung sections.

"D.E.A.D" is very heavy and very aggressive. So if you are a glue sniffer who only needs heavy, then this might work. It's not bad and perhaps better than the more mechanical sounding "Formulas Fatal to the Flesh". The attack relies more on speed . So once again another area where they are more one dimensional than the classic version of this band. Fuller is better than Tim Yeung. He has more power and is more explosive. "Garden of Disdain" finally finds a groove after opening with blasting and is the first moment that sounds like Morbid Angel to me. The way Trey works the pitch squeals into the riff of "the Righteous Voice" is very Morbid Angel.  By the time I get to "Architect and Iconoclast" I am beginning to pick up on more Morbid Angel signature nuances. I am also getting to be more o.k with Fuller, though not totally sold on Tucker yet.

It's the tug of war between not wanting them to totally rip themselves off and recycle riffs vs not wanting the band to no longer sound like themselves. I think there is a decent compromise on "Paradigms Warped". I might be even willing to concede to the fact that Tucker is a better bass player than Vincent here, though the vocals are more intense than what I remember him doing in the past, but not as sinister sounding as Vincent. On "Altars of Madness" there was a raw anger to them, after that a wider range of emotions began to appear on "Blessed Are the Sick" .  There is new and familiar once again banging heads on " the Pillars Crumbling" Tucker's best vocal performance is the double tracked vocals of this song, that feel more like a Deicide trick , but it works. I am beginning to hear that these songs are just better written and more thought out than the stiff chugs of Tucker's other work with the band. Then they get into a more straight forward brand of death metal, with pretty impressive drumming that doesn't stand out on it's own as a song til the chorus.

I like the pounding they give the beginning of "Declaring New Law".  It is less of a regurgitation than the heavy handed "From the Hand of Kings" which does have a cool solo section, but the rest of the song seems like riffs they have given us before used to bookend it. The blasting has already numbed me out and I think other songs have already proven the band is best served taking other avenues. When it slows down and lets the double bass catch up then it seems to work better as a simmering breeding ground for another bizarre heavily effected guitar solo. This did end up surprising me and worked out better than anticipated. I'll round it up to a 9, which means it's not as good as the first four albums , but the best thing they have done without Vincent.