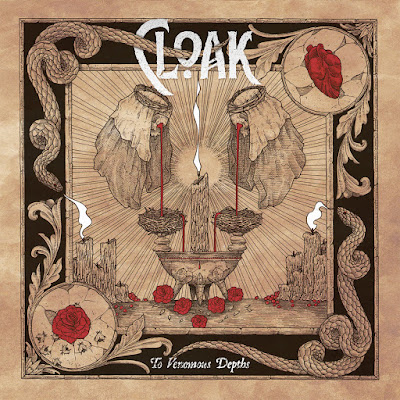 I have seen In Solitude open for Watain twice. This band from Atlanta has either seen them them just as many times or when they did see that combo play together it had such a profound impact on them that they said "What if we formed a band that blended the two sounds?" So they asked vocalist/ guitarist Scott Taysom "Can you do a King Diamond impersonation, not the high stuff just the moaning baritone?"  "No" he answered. "Ok that's fine" they replied just go with a more Dissection style vocal where you talk gruffly through the songs, but never really growl or scream". Scott could do that. It wasn't too much of a distraction from his guitar playing. This is important as there were going to be lots of layered guitar harmonies. And so this band was born.

When people used to complain that Watain sounded too much like Dissection I didn't hear it because they had a rawer pounding to them than more classic metal guitar harmonies of Dissection. Watain and Dissection has a more personal connection than a band from Atlanta would have with them. I head the word "goth" thrown around with these guys and three songs in and I have little to substantiate these claims. Yes they are a dark and melodic, but that doesn't mean you are goth. I can also hear shades of Tribulation in what they do, funny enough another band that was on the bill with In Solitude and Watain. I like this but I have the sneaking suspicion that when the new Watain comes out in January I will forget all about this album. I can only hope they don't bury the clothes they play in or have rotting animals on stage. There is a few seconds of sung vocal before the guitar solo.

There seems to be a trend with all the bands I have reviewed lately where the bass player really kills it and the guitarist not so much, though these guys buck the trend as the guitar parts are skillfully arranged in a way that is impressive in it's own right. "Beyond the Veil" is more melodic than Watain gets as far as the guitar parts go. I do like the bass driven break down in this song. The vocals go into a whispered spoken phrase for a section, but no Peter Murphy.It does go in a more rock n roll direction when it's time for the guitar solo. As things begin to get a little darker they begin to break away from some of the Watainism. The more melodic excursions are where we hear more of this band's personality. For "Death  Posture" to be able to hold my attention as an instrumental they are doing something right. "In the Darkness, the Path" finds the vocals getting a little more grit, though still in you know who mode. They have some pretty clever guitar melodies that creep out of their sonic shadows.

"Forever Burned" does open with picking that is much more Dissection than Watain. I like how they back off on the verses to give the song room to breathe. The ten minute closer "Deep Red' also embraces more of a rock n roll feel despite the more throaty roar off the vocals. In this way it makes me think a little of  Tribulation. Some of the chugging on the verses has a classic 80s metal feel. I think these guys have a lot of potential and maybe the just need to grow out of their influences and in who they are , I mean even with In Solitude there was a ton of growth going into 'Sister" and they had shed the whole Mercyful Fate thing. Obviously if you like the bands they are drawing inspiration from then this is worth a listen. I'll give this a 8.5