Death of Lovers : "the Acrobat" 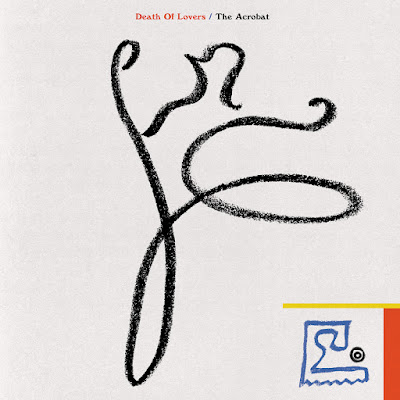 Their first album was darker falling somewhere between death rock and shoe-gaze. Their sophomore release finds the band now  growing up through the 80s into new wave. You can here touches of Flock of Seagulls on the opener, then on the second the synths take over. It bouncy and upbeat, detached but happy. The vocals show signs of improvement as the melodies slide smoother over the arrangements and they are singing out rather than allowing the vocals to lose themselves in the murky mix. "Ursula" is more Gary Numan like in it's dance floor pulse. I like how the vocals were produced on this album and they also got some pretty crisp clear guitar tones that let the melodies ring out. The drums could stand to come up some though.

Some of the old familiar sounds like the Cure inflected guitar tone returns on "the Lowly People", though it's largely a more electronic affair with the vocals staying in the calm Gary Numan range. Things go in a more New Order direction with "Perfect Direction". Vocally it owes more to their shoe gazing other band.  There is a more organic feel to "Quai d' Orsay" that falls somewhere in between The Church and the Cure. The chorus has a more understated melody either of those bands typically employs. The vocals also more detached in their plaintive plea. The guitar solo in this song is pretty cool. They make a slight retreat back to the shadows with the bass line of "Divine Song" that is a return to their darker past sound, though more reflective than brooding.

The sax solo tagged onto "the Absolute" is a nice touch and helps break things up, for some reasons this song makes me think of that band Vhs or Beta. I'll round this down to a 9 since it's not as dark as the first album. I might round it back up you never know how an album is going to grow on you and it might just need a few more listens. Obviously to as high as it did it's not shabby and I plan on giving it the chance to ride for a few weeks and my iPod which is one of the biggest compliments I can give an album since those gb's are landscape in high demand.