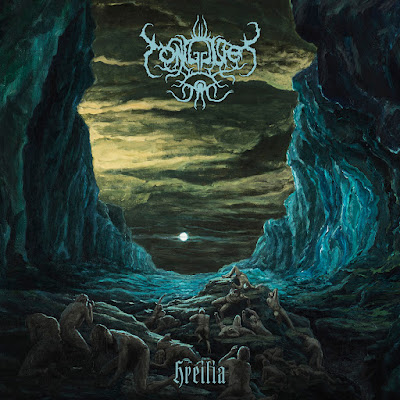 There is a reason I don't start my end of the year lists in November. It takes all of November to catch up with the rest of the year or in the case of this album check out stuff that is coming out in December.  am going through my in-box clearing out some of the promos that I thought would be cool, but upon listening to learn otherwise. While doing this I have come across a few gems the first of these being this band from Denmark. They impress me by being a black metal band that doesn't start off with blast beats. Instead they simmer in discord before allowing things to escalate there. I have said before I don't hate blast beats , you just can't be a one trick pony with them. If blast beats are all you have got then you are typically deleted midway into the second song, as I have too much music to listen to and not enough time for that. The harsh vocals here have a more fiendish rasp to them.

By the second song the drums to get into a rawer sloppier place, but they still invoke a dynamic ebb and flow. These are at times like Deathspell Omega in their adventurous nature as the song is loaded with odd angular twists and turns. I was not expecting the guitar solo to be thrown in their. The darker throb of "And the Ever Watchful Clouds" sounds more Swedish than Danish as it carries an icy melody that would not be out of place on a Dissection or Watain album. The vocals are growled at cavernous like doom pitch. The song after this settles for being more status quo for black metal until the slower break at the two minute mark. It more blast beats and fast razor sharp riffs. The bass player does anchor this all in and gives it balls like a bass player should, but seldom does as they tend to get lost in the mix when it comes to black metal.The ending finds them stomping down into  more of a death metal like place.

Going into the album's third act they begin to fall in line with a more typical black metal sound , though the guitars still maintain a sense of melody. The album closes with the title track that starts of with bizarre soundscapes and never turns into actual metal from there. Overall this is a very solid album and I am impressed by these guys. I will give this album a 8.5 and keep an ear out for what they do in the future. This comes out on I Void Hanger on December 3rd. If you like your black metal dark and discordant this album is for you.