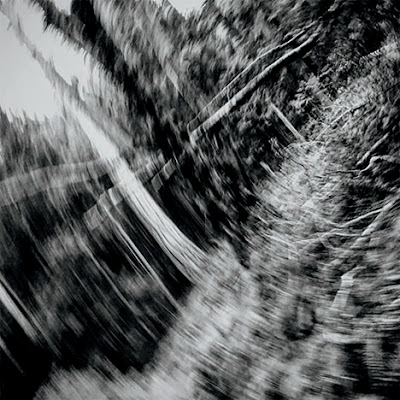 This Candian trio's first album found them creating an original blend of darkness and dissonance . This album album doesn't find them in the same shade of darkness, but they have not lost their sense of adventure. The guitar tone and odd time signatures have more in common with Krallice and Liturgy than Deathspell Omega. The guitar tone is cleaner, which allows you to hear the notes without being encumbered by the feedback. Midway into the song with start getting more into their odd sense of sonics with a piano break that is surrounded by an otherworldly buzz. The way the bass falls makes me think of Sleepytime Gorilla Museum. The way the drums carry more of a swing with them coming back in only further fuels this comparison.

They sink back into the dark place I admired on the first album going into "Self Devouring Womb". The odd time signature and almost jazz like feel return. They wind up into a more tightly coiled groove haunted with layers of atmosphere before devolving into blast beats. The results are very effective when they step away from some of the mathematics and punch with more of a chug. The song dissolves into violin , cleanly picked guitar and synths to form the opposite polarity from where the song was. The spiraling prog of 'Cursed Numbers" almost makes you dizzy. With synths blending into sound effects to keep the song going when the bottom drops out of it. Their drummer displays that he might have the widest range when it comes to going beyond the blast beat of any black metal drummer.

The title track opens with an choral piece, that never goes any where , but sounds like something that should be used as background noise at a haunted house. No instruments are played nor is there metal to be had, instead this noise for over seven minutes. While this album is proof that black
metal is still worth experimenting with it is only three real songs, so for the noise fest at the end I have to round this down to a 8.5. If you are looking for black metal that is dark and takes risks.Being released on Dark Descent Records.