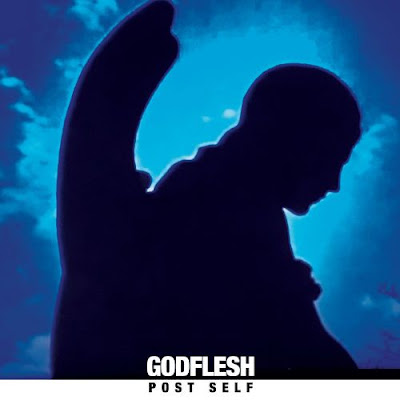 Justin Broadrick's flag-ship project has been many things over the years some heavier than other's . Some incarnations paved the way for Jesu more clearly.The opening track with please fans of the earlier incarnation as it is heavier. The vocals have a snarl to them. It carries more of a drone while "Parasite" that follows has more of a groove and militant barked growl.The first to songs moved with more of a metallic stomp, leaving "No Body" as the first song to strike me as industrial. It's also the first song that caused the involuntary head bob. The vocals are gruff but muted under the beat. This is the best of the three opening tracks it blends atmosphere and machine driven heaviness.

There are some really cool effects on the chant of the vocals on "Mirror of Finite Light". This places the song closer to Jesu.  Then there is the throb of a more apocalyptic darkness on "Be God".  The atmosphere gets almost shoe gaze like going into "the Cyclic End". The vocals are more sung, there is a lower moan to them so they are more punk than how he normally sings. It is very dark, though more of drone that something you can see yourself jamming out to on the way to get beer. This album does drone more than his work, though it is a few shades darker so I can deal with that compromise. The title track find the vocals sitting back and dissonant slabs of guitar creating the pounding pulse.I can appreciate the more experimental touches but think this band works best when driven by beats that sound like a giant robot stomping through a city. The effects on the vocal on "Mortality Sorrow" only further this comparison. Thicker layers of synths coat this song.

There are some great hefty bass tones on this album. One of them is the back bone to "In Your Shadow". The overall production on this album is great. Very created and spacious, yet able to crush you when things need to retract and get more in your face. The vocals come in under blanket of effects to sound more like another instrument. The album closes with the aptly titled "the Infinite End". This one is thicker on the atmospheric with the vocals buried under the swirl of drifting sound. Another song to fly away to on your bed after popping some pills , but not for being out in the world, unless you are driving around stoned as a bat. I'll around this one up to a 9.5, it might not be their best album , but it's a damn good one.