the Faceless : "In Becoming a Ghost " 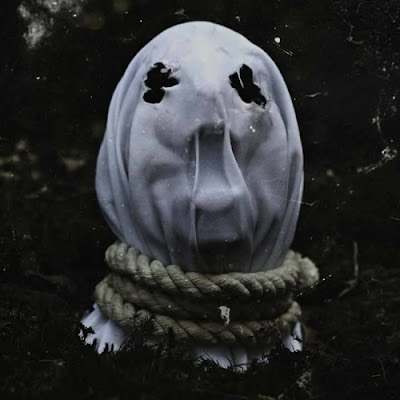 I used to love "Planetary Duality" then the album after that sucked harder than a Tom of Finland portrait, what was even worse however was when I saw them on a Summer Slaughter tour and the clean vocals came across thin and out of key and the over processed guitar tone was weak. "Digging the Grave' strikes me a being a step in a direction away from the suckage that was "Autotheism" is certainly goes in a proggier direction by the end of the song.I don't care for shredding one way or the other, but this is how to do it if that is where you going.

There is the line-up changes to talk about. Lets face it Micheal Keene is the only original member so clearly it's his show. The only members of note to speak of would be former Oceano drummer Chas Westmoreland, who plays drums on this album, but not listed as a member of the band. Then there is Abigail Williams alumni Ken Sorceron who is handling all the harsher growls with Keene still handling the clean vocals which are split about fifty fifty on this album. There is a more of a darker quirk to the jerking motion of "Cup of mes". The brief burst of electronica makes me think these guys have heard Igorrr. The clean vocals are lower and have a little more resonance to them. The bass lines were all recorded by Keene, so while they wind around the guitar patterns with some mimicry they are better than what you think of typically coming from a guitarist who is playing bass.

"The Spiraling Void" finds them spiraling down into some Dream Theater like masturbatory excess.They redeem themselves with an unexpected cover of "Shake the Disease". There is a slight hint of Mike Patton to the clean vocals at the chorus of "I Am". Thankfully the instrumental that follows is kept to under three minutes. The clean vocals on "the Terminal Breath" have a almost more of a punk bite to their initial sneer and later smooth out into a croon. Musically it's a decent balance of showing off and writing something for the vocals to make sense of over. So this album is a hug improvement over the last one I'll give it a 8.5.