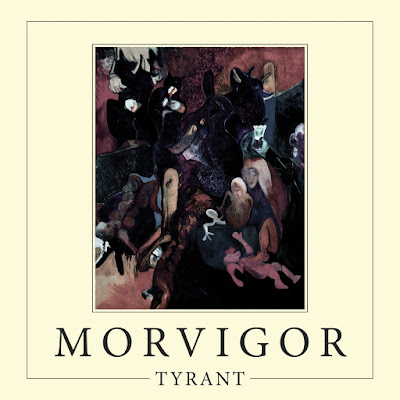 This band from the Netherlands plays a fairly straight forward death metal influenced version of black metal. They have enough sonic depth and emotionally charged melody to qualify as black metal. Many of the riffs are pretty hooky. It is clear these guys care about the songs. This might seem a little false to some who just want to be blast beaten to death. The vocals have some rhyme and reason to them working around the guitar much lie sung vocals would. They head into an even more melodic direction going into "the Martyrs Ascension". The bass has more drive , but it is in the same realm of melody as Dissection. It takes almost four minutes before they get into the galloping meat of the song. The guitar carries the melody most of the type here as the vocals maintain the typical role of growled vocals in melody though offering as much dynamic variance as they can without singing actual notes.

The centerpiece of this album is the 15 minute "Blood of the Pelican". This raises the question as any song of this length... can it keep my interest for 15 mins. Anything is possible , but not everything is likely. Two minutes in and I can hear where fat could have been trimmed off the intro. It's a cool melancholy melody that could have done without dragging on. The bass player of this band is really good and throws in lots of melodic fills. The opening riff doesn't build until two and a half minutes in. On the previous song they ran into a similar struggle with the winding opening . They don't have to get to the point, but it's a case where it would have been cool for six measures rather than sixteen. At the four and a half minute mar the double bass kicks in and the meat of the song is underway.

The title track is more along the lines of Goatwhore, who are the main band that seems to influence these guys in terms of how they vocals are traded for from a death growl to a higher scowl. Not as heavily influenced by death metal as perhaps newer Goatwhore, there is more of an epic thrash feel closer to the snow capped mountains of Immortal. The clean vocals surface show up at the end of this song and give it more of a viking metal feel. Overall this album is really well done I'll give this album, which would almost be more like an ep if it was not for the 15 minute song an 8.5. It's well played and dynamic, doubtful I will get a great deal of extended listening out of this since it possess many of the same qualities derived from other bands I already have in my iPod, but if you are looking for some accessible black metal that blends other sub-genres seamlessly this is a good album to pick.