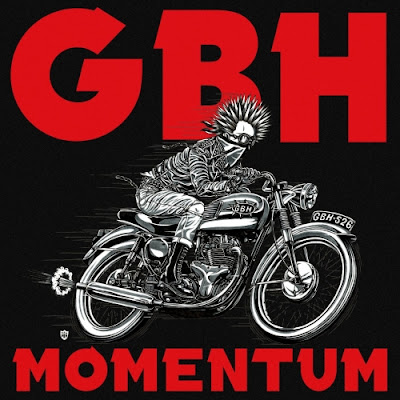 What's impressive is aside from drummer Scott Preece this is the same line-up from 1978.  The album opens in similar vein of metal as Motorhead. Too aggressive to just be rock n roll, but closer to metal than punk despite the gang vocals that chime in. It does sound good. The production is more organic and rock in roll. The second song does go in a more punk direction, though heavily rock influenced and not as aggressive. Granted these guys have been playing for almost 40 years so if they don't know how to play their instruments at this point there would be a problem. Of course with these guys being a punk band the songs are very compact and stream lined. Vocalist Colin Abrahall sounds great somewhere between punk grit and the kinda rock snarl that Taime Downe from Faster Pussycat carries.

The chug of "Population Bomb' finds them back between Judas Priest like hard rock and punk. It's also one of the album's better songs. "Enemies" has more of the straight forward punk riffing. However I don't think it's as solid  of a song as some of the more thoughtfully written songs on their more rock side. "Us Against the World" confirms this theory, though it balances out both sides of the band. The tempo picks up for the aptly named title track that falls well within the bounds of being punk. Granted some of the more punk riffs just sounds like all the other punk riffs you have ever heard , but that is the nature of this beast.

"The Perfect Storm" finds Colin's sneer retaining a sense of street sleaze. For punk this is more mid tempo though for rock it would be considered brisk. There is more of the 80s LA shuffle to "50 What" which must be about being an aging punk rocker. Though they sound almost as young as the did in the early 80's when they were more charged. The tighter riffing on "I Never Asked For Any of This" sets it apart from the earlier songs. "Blue Sky Thinking" starts off with a fanfare that would not be out of place on a Poison album. Not as aggressive as they once were, they make up for it with the catchy choruses and guitar solos, which you may or may not want from these guys. I have never really that invested in them to get my feelings hurt either way. I do like the ode to the woes of drinking called "Liquid Paradise " they close they album with it has a slightly Stooges like swagger to it .I like this album I'll give it a 8.5, as the more straight forward punk moments can be a little boring with the 1,2, 3, go style of punk. It comes out this week on Hellcat Records.