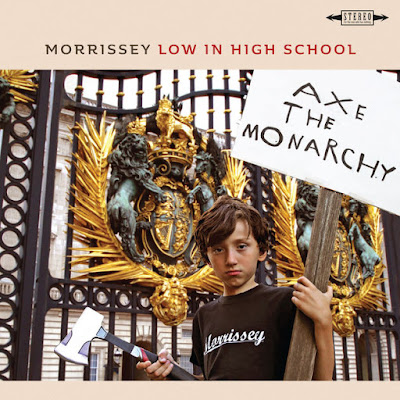 We know this is always hard for me, as the expectations for some one of his magnitude in my life is out of this world. Things are very different on this album.The production is weird it sounds like this album was recorded on a space ship. Vocally the first song is a mixed bag as it it is not crooned as smoothly, though he even goes up into a falsetto, perhaps not as easily as he once did. Despite the accents of the horn section that song is pretty dark despite the skip in it's step. Some kind of of yelling in the background when it resolves and fades out. "I Wish You Lonely" automatically feels more like classic Morrissey despite the weird surrounding the production and some of the songs that sound like they are from a St. Vincent album. But this song has a groove I can get down with and sign off on.

The producer of this album also produced "World Peace Is None Of Your Business", along with this year's Cherry Glazerr album. The lyrics teeter on melody of "Jacky's Only Happy When She is Up On Stage". The narrative seems to be the focal point. There are some interesting guitar tones.His vocals get back to smoother place I want from him on "Home is A Question Mark". There is a surf rock reverb on the guitar in the last 2 minutes of this song. I had heard the single "Spent the Day in Bed" and was all right with it even though it is strangely upbeat. His voice sounds great here and that is the most important part of this. Lyrically this is a very politically in your face album, but he is not taking a side when it comes to American politics , but makes fun of the sheep who put stock in things like the news.

At almost seven and a half minutes "I Bury the Living" is the album's longest song. There is too much atmosphere on the front in which could have trimmed a minute of its run time. The vocals are more spoken than sung. He is not fond of war either. I guess this is a good veterans day song. The little "Funny how the war goes on..." part seems like a different song than a coda/ refrain. "In Your Lap" is piano based ballad that meanders. The piano part in "the Girl From Tel-Aviv Who Wouldn't Kneel" works much better as the song has focused melody and movement.There is a collision of disconnected lyrical themes on "All the Young People Must Fall in Love". Musically it reminds me of one of Ringo Starr's song which sounds like it should be in a parade. This is counter balanced by "When You Open Your Legs' which throws in an strange mix of musical styles that some how work in the way they are stirred together. There are almost as many horns on this album as a ska band might have, just used more wisely.

After the opening movies Moz plays live with clips of police brutality " Who Will Protect Us From the Police" is no surprise. It's always a pretty decent song, despite the groove of it's new wave bass line. "Israel" is another ballad , but this time it is a more compelling middle finger to religion that I can get down with too.Not his best album, but it is still better than the best from most so I 'll round it up to a 9.5, as I might have been a little hard on certain parts.