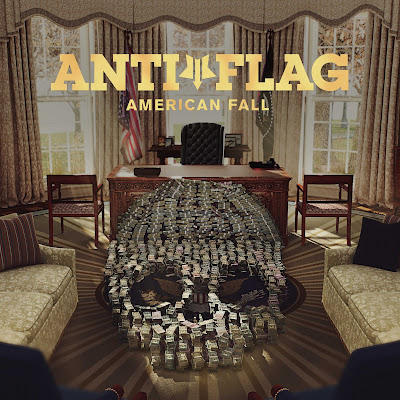 Despite the predictions on social media after Trump's win, 2017 has not has not been a big year for punk. Sure some punk album's have come out , but no more than normal. These guys have been around since 96, so they have held on longer than most pop punks bands from that area, perhaps it's because they did not shine the pop side of their hooks up as much as say Blink 182. Though these guys have always struck me as being more from an Offspring or Bad Religion mold. The second song is more run of the mill than the first. This album is well produced, which might have taken some of the punk snarl from it. One of the fools from Good Charlotte produced this so that factors in on the pop meter. The first song starts off as a strummed sing a long and then goes into more of a ska bounce. My problem with ska is it's way too happy. In their promo picture one of the guys is wearing an Operation Ivy shirt so I should not be that surprised. They then proceed to sound like a pop infused Rancid on "Trouble Follows Me".

"Finish What We Started " makes it obvious that bass player is the most talented member of this band. The big choruses are beginning to get annoying. "Liar" then makes a pretty good effort to get this album back to being punk. There is a darker note to "Digital Blackout" which makes it one of the album's best songs.Here the big sing along chorus reminds me more of 80s hair metal. From there things get back to being too happy. "Racist" is one of the more lame brain moments, with lyrics that could have come from their Facebook feed. In fact sonically the final three songs fall rather flat with "Throw It Away" being the best of the three.

I think giving this one a 6 is being pretty generous as it has a few moments , but over all lacks the danger that punk should have. I am ok with the slick production if something with more depth is being packaged in it. These songs could very well be left over from the days of Myspace.
Posted by Wilcifer at 8:18 AM