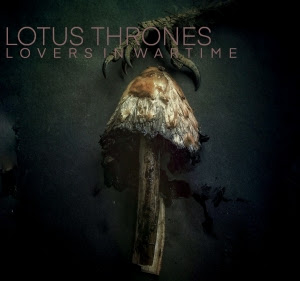 Another metal musician goes to the dark side. The trend of having a post punk project is one I am fond of despite the mixed results it sometimes brings. This one comes from former Wolvhammer drummer Heath Rave. He recorded this during last year's quarantine. His self isolation was not too strict as he is joined by Bruce from Yakuza who throws down some sax on a couple of songs. Andy from Feral Light also drops a guitar solo on the fourth song "the Quarry" .  Sanford Parker mixed this album so few metal heads have their hands in this. It can be felt on the almost sludgey rough edges of the songs as they trudge more in an Atriarch or Neurosis like place , more than any of this sounds like the Cure. Yes, there is more atmosphere on this album than your average metal record. In fact this plays to the strength of the songs as the more ambient "Fatigue" is better than the more brooding album opener.

Like most things it is all about balance. When he pretty much hands the third song over to Bruce's sax the results are something that feels more like an interlude than a song. Yes, it sounds cool, but cool sounds alone does not a good song make. The drums take on a more industrial thump on "the Quarry" which has a more Killing Joke feel in how the song moves. Vocally he is nowhere close to Jaz Coleman, as the vocals are more spoken in an angry fashion than they are sung here.  The guitar solo is nothing to really write home about, so if you need a session soloist I would not call Andy. Heath is a better song writer than expected , as there is a memorable hook with the line 'do the world a favor and go meet your maker" which I think sums up my thoughts regarding COVID as well.,

It is like Heath has a love / hate relationship with saxophones, he loves them since he is willing to let them dominate the songs he features them in. But he does not know how to share the space with them. Perhaps this is why he just gives it all to them. He makes no attempts to work vocals into these moments as if he feels the two can not share the same spotlight. There is more drive to "Diametric Retrograde' and is a much better stab at post punk. Here he once again shows me how competent he is as a song writer and uses guitar feed back to occupy the same space the sax did in the other songs, proving the same sonic  space can be shared it just isn't .  There is a really weird downtempo cover of Bad Brains' "I & I Survive" , which works but I am sure some one is going to come along and say they were appropriating.  I want more of what was tapped into with "1000 Suns" even if it is not album\s best vocal performance, I like the more punk energy, and I am normally complaining about post-punk being too punk or most new death rock bands being punk bands who are just using a sound. I will give this album a 9, it is one of the better attempts at this coming from the more recent crop