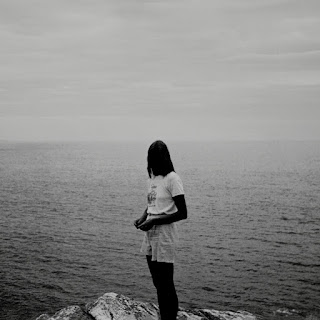 Droning shoe gaze dream pop with smart lyrics opens the first song. Less is more here as melody and ambiance are given enough room here so when the pulse comes in it all works together. The lyrics are pretty clever as well. But will all of these elements still work if what you see is what you get here? Can this sort of thing make this sound work for an entire element or will it fall dynamically flat ? . The second song does not offer a clear answer for this , thought guitar is added and gives more movement, there is a sense that this could be an extension of the first song.

I am a little confused with "2020" it is basically a cover of "Gone Away' by Offspring the only thing is rather than covering the actual song it is just the chorus, it works in a weird way but I am mixed on the principle of it. Part of me is like ... if you are going to cover a song then just commit and do it. "Colorado" finds her doubling down on the sound, more than the song. It is surreal and dreamy with heavily effected vocals blending their sing song chant in amid the minimalist strum of guitar. There are other layers of effected guitar that creep in , but as far as dynamics go it just kind of works off this throb.

"Promise Ring" runs of a simple drone of piano and the distorted sing song chant of the vocals, which does have a quirky charm to it in some sense, but when it comes to songwriting, really just runs off one trick. The song does transition with new sounds added, but no other compositional shift like even from a verse to a chorus until the Jesu rock kicks in at the end which is a key selling point. The drumming is pretty decent here. The last song is similar to this one, though the faint breathy melody is not as interesting. I tried to reserve judgement until more layers of sound were added. .But they never really go anywhere so I am left to sit in my disappointment . Overall for what this is the album is an easy listen , if you just let yourself get lost in the sound and do not think to much on the lack of actual songwriting, for this reason I will round it down to an 8.5, which is still better than most. It makes sense this is being released on the Flenser.