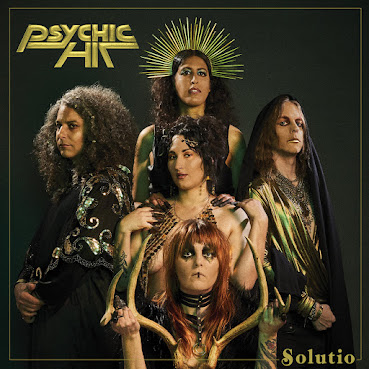 This band did not just fall off a turnip truck in California, it's members come from the likes of Hawkwind and and Funeral Chant. They know how to tap into early 70s metal recalling even Judas Priest in the more metal moments on the song "Constellation". Their other heavy boogies pulls from Thin Lizzy and Alice Cooper. Powerhouse vocalists, Ariana Jade as enough sass and sultry to her voice to feel like a legit proto metal front woman. All the players sound pretty capable , the bass player's melodic work fights it's way in the mix and impresses me, along with the more jammy direction the second song goes in.

Where most retro metal tends to languish on recapturing a sound, they have the 70s warmth without getting lost in it . The hypnotic bass line into the psychedelic opening of "Orocovis" is an excellent example of this. It is not like they suddenly become Jefferson Airplane, when the verse kicks in they take back off in the harmonized guitar gallop. While they would not be totally out of the zip code of bands like the Devils Blood, who came out a decade ago. They are more metal in how the guitars attack. Most of these sort of bands tend to fall closer to doom, and that is not even hinted at until the third song. They have carved a pretty unique path for themselves. The more aggressive "Left for Dead' is perhaps the album's most overtly Judas Priest like moment. Thus making it the most metal thing so far.

They dial things back with "Hand of Fate", when the song builds back up there is a more palm muted attack before the riffs start coming. The vocals begin to share a pattern by following the guitar more and perhaps being a less hooky than they were the first half of the album.  They close the album with the best riffing, it reminds me a little of Rainbow. The vocals however are less Dio and come across as a garnish rather than the meat of the matter. This album is a lot of fun while at times the influences are worn on their sleeves, they still have an identify of their own . I will give this album a 9 and see how it sits with me.