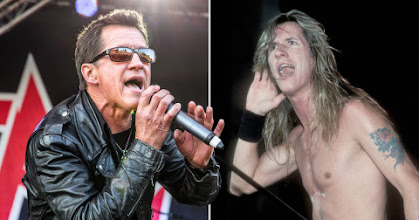 Mike Howe died at the age of 55. He most recently appeared on Metal Church's 2018 album "Damned if  You Do" a full review of it can  be found here...

Abysmal Hymns: Metal Church : "Damned If You Do"

I gave the album a 9, meaning I thought it was great, I think iffy production was the only thing that held it back, but Mike's singing was the strong suit. He joined Kurt as the only other long time member of the band so I would hope it serves as their swan song. While Howe was not the original singer, having to replace Wayne whose was another stellar vocal talent who passed in 2005, Howe not only filled the shoes left by his predecessor well, but he gave the band both a heavier edge in his snarl, but also a more accessible feel as he could shift into a more straight forward rock style of singing that opened new sonic doors for the band with each album.

"Blessing in Disguise" is a fucking classic that holds up against their first two album's, it was a more compact thrash attack and one of my favorites in my early teen years. I caught the band three times on that tour and meet Mike who not only took the time to connect with me like a older brother, as he remember my name and even gave me a shirt the fourth time I saw the band later on the "Operation Rock n roll Tour" where they held their own opening for Motorhead, Alice Cooper and Judas Priest. He had a great stage presence+ and a powerful dynamic voice. I saw him a total of four times and he never disappointed. This was not a loss I expected as he seemed youthfully healthy when they released the last album with him. In a world where thrash singers at the time stayed with the respected box of the genre, Mike stepped out of it and did his own thing for this he will be missed as he is a truly irreplaceable front man.