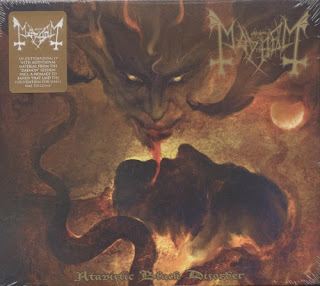 The first three songs on this album are leftovers from their last album . The first of these is pretty effective and finds the band going back to something more closely related to their earlier black metal days than the bulk of what was on that album. In some ways the same could almost be said for " Black Glass Communion". I am not sure why these songs were left off the chopping block for the last album as they might even be better than what I remember of it. The riffs are a little catchier in places.  The drumming is outstanding. In some ways these songs are a little more straight forward in their aggressive intentions , though far from being blasty mc nasty, almost closer to what Behemoth does riff wise. Charles or Ghul wrote the second song which might explain some of this.
There is a similar chilling throb on "Everlasting Dying Flame' that remains true to what this band does .Attila continues his signature croon and shifts around into different creepy voices, while not as extreme as say King Diamond in the versatile nature of what he does it is better than his peers who stick to a more straight forward scream. The drumming is very frantic , but the song is not as memorable as the first two as it drones on the riffs a little too much. The drumming does try to switch it up. Granted this is Hellhammer we are talking about who at 51 continues to prove himself as one of metal's best drummers.   Then come the punk covers. They start off with Discharge's " In Defense of Our Future", which as far a punk goes , is one of the better bands, but compared to what they normally do this is still dumbing it down.
"Hellnation "is well done and he nails the vocals. The only problem I have with this is lyrically it kind of conflicts with the normally bleak message that Mayhem normally carries ,because the tone is do something to save them world rather than ...fuck you you deserve death and destruction . Tonally the Rudimentary Peni song aligns more with the nihilistic perspective, though musically is a step backwards though they are just working with what was written, Asa song I think this is where the Ramones prove themselves as the better songwriter when it comes to their punk peers as it is the highlight . "Commando" is lyrically neutral. I will give this a 9 as it works well lyrics aside when stacked against their other work . Not an album I am really going to listen to a great deal , but works for what it is.
Posted by Wilcifer at 4:46 PM