ESSES : " Bloodletting for the Lonely" 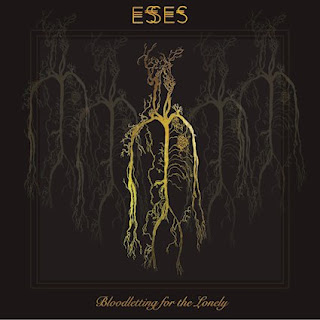 After a month of death metal I am ready for something not metal, but still heavy and this album fits the bill with it’s stormy foreboding tension. Oakland must be goth as hell these days as this is where the bulk of this revivalist death rock seems to be coming from. Ok this is a little more on the Siouxsie side of things, perhaps a bit less manics than Miss Sioux’s more punk days. The bass is driving and more over driven which owes more to Bauhaus. The vocals are more aggressive than your typical Siouxsie worship. I normally want more post than punk in the equation, but there is less pretense . It feels like a very natural progression of where there sound wants to go rather than the band trying too hard to capture an era they were not even alive during.

The more brooding and eerie melody of “Four Corners” helps set itself apart from the other songs, but as we get into the meat of the album the more upbeat frantic pace begins to give everything a more uniform soun, which finds me having to go back and give it a second listen. Despite the more unique mood of “Four Corners’ the melodies are more caught up in their creep rather than forming a hooky melody like Siouxsie did back in the day. But so far I would say these kids are doing a better job than most of their peers..” Infinite Void” is more punchy and punk, but I like how she keeps things varied with the vocals. It is not until “Before the Blight” that things begin taking on more of a uniform sound.

They break away from the punk thing on “Faceless Past” which proves to be far more interesting when the vocals are given more space to breathe in the blackness. They circle the same brooding shadows on the more bass driven “Caged Beasts” . The more hushed coo of the vocals emote from a similar place.  With “Schism” they continue along the same hypnotic path the previous two songs set them upon ,but this one might be the most compelling of the 3. I will give this album a 9 despite the formulas they work off this is more dynamic of a listen then their peers are producing.