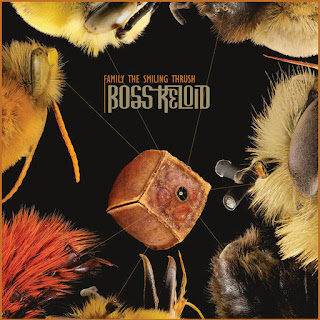 Prog for heshers. Prog is not a far step away from stoner rock depending on the flavor , but here it is done in a angular yet ballsy manner than flirts with metal. The grooves are formed from odd times. The vocals are more blues based perhaps not as commanding as Clutch , but cut from a somewhat similar cloth. The guitar tone is weird it sounds to be harmonizing with synths on "Gentle Clovis". I do like how ballsy the vocals are. If opens up into a more melodic section where they off timed melody brings Frank Zappa to mind.  The math of their slithering grooves is impressive when it comes to "Hats the Mandrill" it feels like the vocals are just kind of bellowing over the riff rather than grooving with it. They remind me of the weird direction some metal bands went in during the alternative time of the 90s. They were too proggy to be grunge but not aggressive enough to be metal.

These guys are talented as hell, the bass player and drummer work as a sick machine together. There is more of a less complex rock groove to "Smiling Thrush" . The vocal melodies have that off time quality that 70s Zappa did until they go into a cleanly strummed guitar section, that is not a chorus , but is not the verse. With repeat listens this one does grow on me, They do kick into a cool heavier part with a fair amount of angular dissonance to it midway in. While most bands that get called progressive never write songs that go anywhere and end up just wanking in one place, these guys to explore. This song even manages to find a hook of sorts. "Cecil Succulent" does expand more in the Zappa direction as it has a great deal of jazz influence. The vocals chill a little and bellow less allowing the melody to flourish. The bellow comes with the dynamic kick in the pants.

They continue to weave their fluid dazzle of finger magic on " Grendle' which finds them conforming a little closer to a radio rock formula without dumbing it down too much . There is a exotic touch to the melody of the last song when it ebbs down. The vocals are still belted with a similar intensity. Much like every other element of this album the vocals are well produced with more layering than effects as there is dry sound to them. If I had to pick an MVP for this album it would be the drummer. His playing is tasteful for what they are ding he has every excuse to be over the top and serves the songs. I will give this one a 9.5 it's the prog album to beat this year.