Gost : "Rites of Love and Reverence" 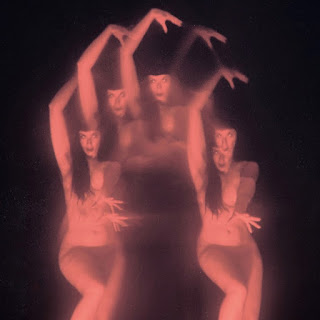 In the past I have been more into what this project seeks to do than what is executed, here the execution seems to have been given time to come to fruition in the studio. The songs do tend to grow on me and I am not sure I have spent enough time with this album yet. I have concluded a few things abou8t this album so far though. One of them being it is at it's best when things come out of left field instead of playing it safe as dark wave. Aside from the reverb heavy guitar "Fleeting Whisper" is color by number revivalist dark wave. It does not couple it self with  industrial to pack more of a punch . Nor does it layer the synth melodies like the second song.  The second song also uses elements of dub step that play to it's favor as the song progresses

The steamier groove to "We Are the Crypt' is another example of how it  grows on me when I pay more attention to what is going on here. I like the song but feel like it could benefit from a better sound when it comes to the programming of these drums. "Blessed Be" might thump a little harder than some but does not have the greatest range when it comes to dynamics. The late night bat cave throb of "November is Death" works for what they are doing, however I am a firm believer that you should never say 'Oh this is good for dark wave or insert any genre there as , good music should be good music, if it is a part of a genre that makes excuses for itself then it sucks.

I guess the rough guitar mix in "Embrace the Blade' is an attempt at the death rock sound, the song does get credit for having a more expansive range of sonic twists and turns. The vocals come closer to establishing a hook at the chorus. "Coven' has a little more weight to it's thump. Not industrial but looking in that direction. It does get heavier as it goes though is still not the albums most memorable song. Things come to a close with "Burning Thyme", it's a more dramatic folk tinged ballad. While the limitations of his vocal style can be felt, it still works as a song  Not a perfect album , but it is an easy listen and I can listen to it on repeat so I will give it a 9.