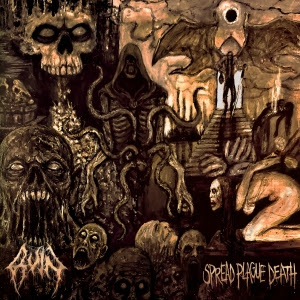 They come back nastier and grimmer on the title track of their new album. It has more of a death doom cadence. I really love "Human Annihilation". It had a very tangible hate to it's sound. In the time of metal growing kinder and gentler I need it to be more hateful. These miscreants  deliver.  It is not until a few songs in that things pick up into the faster pounding most death metal is known for. They have not gotten any softer and it is still just as effective when they go from the jack hammer into a more deliberate crunch. All too often heaviness seems to sacrifice  a willingness to care about song writing yet here we are with the most dismally gurgled vocals and the songs still have me engaged. There is groove in the weighty trudge of the mammoth riff. "Catatonic Vomit" has a great fucking riff, but also explains my rule of cool riffs alone does not a good song make, as they weave it into other even heavier dynamics until it climaxes into chaos.

They continue to weave the album together with samples between songs. Fans of more straight forward aggressive death metal should be appeased with songs like "At One With Earth and Worms" , though I prefer the albums creepier moments the more go for the throat moments come closer to sounding like one of the countless death metal bands who places brutality at the top of their to do list. The get back into this creepy with "Ornaments of Flesh" but the raw jagged density of guitar creates a less ambient wall of sound, coupled with the speedy churn of drums under it. Savagery begins to steam roll song writing a little though the song still has interesting twists and turns. By the time I am at "Slow Degradation" I find myself having to go back to give songs repeat listens to pay attention to what is going on as my ears are hit with the guitar fire and foremost. They do slow into a more deliberate chug before putting the foot to the gas. The moments of acceleration still works as they are given dynamic contrast so for as heavy as this album is it never feels like you are being pounded the same way twice.

"Quietus" takes the more blasting approach at the onset before settling into the grimy dirge that is the focus of what we might call the verse.  The songs seldom venture over the five minute mark. This keeps the beating very contained. Just when I am ready to write the sonic sadism off as an act of barbarism they come in with a riff that is infectious and pulls me back into it. The deliberate tone to "Awaken Rotting Decay" proves a much more punishing chug than some of the faster offerings, though even in this song they pick things up , but after the more dirge like tone it is easier to digest. The dominating bass tone gives more drive to "Choking on Burning Blood"; For what they are going for the production is much better than expected as there are layers of guitar heaped into a wall, yet the needed melodies cut through. It is a more musical effort than the previous album. Some of the chaotic guitar solos ow a great deal to Slayer with all the dive bombing. The guitar on the last song is mean as fuck and is a sound they have dialed in to the max. While vocals are pretty much just a texture, you do not realize how important they are until they throw an instrumental at you. I will round this up to a 9.5, it is one of the best heavy as fuck albums I have heard at least when it comes to death metal this year.