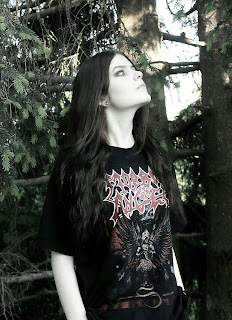 Live death metal, sounds like an oxymoron. Of all the sub genres of metal this has been the one that has been a trickier balance to obtain. Most of these bands play smaller to mid size venues, I am only seen perhaps one death metal band do well in an arena , they made it onto this list, and happened to be opening for Ozzy at the time. Often becoming boring due to the one track nature or not transitioning well to stage due to either too much volume or not enough. I have seen both issues plague bands. Most recently Incantation underwhelmed at my last pre -Covid concert due to low volume. Too loud is a more common problem as they then become a slushy wall of noise. Some of these bands used to be death metal bands and grew away from it into something else so I am referring to when I saw them back in the day as a death metal band . Including clips from the tour I saw the on
10-Obituary
I want to give these guys another shot , as I was not blown away but have been listening to them more in recent years and it could have been an off night for me as I just went with friends.
9-Unleashed
These guys might be headliners now , but I saw them open up for Morbid Angel on the "Blessed are the Sick" tour.
8-Skeleton Witch
With some of these it is just a clip from the tour I saw them on this is the exact show. These guys were a lot of fun.
7- Fear Factory
Things began to change for them at this time, but they came on ajnd crushed it really hard in the smaller club setting I saw them in .
6-Sepultura
Another band who was
5-Tribulation
I was impressed how these guys did their own thing with little attempt to conform to what death metal should be and went off into long jams
4- Goatwhore
These guys were very powerful yet also a great deal of fun,,,
3- Morbid Angel
As long as these guys have Pete they are hard to beat.
2- Opeth
They used to be such an incredible band until they got too proggy for their own good and quit playing metal
.
1-Carcass
Some how I did not catch these guys back in high school, I do not remember them touring a lot then, but I did catch them on the first reunion tour.
Posted by Wilcifer at 6:03 PM