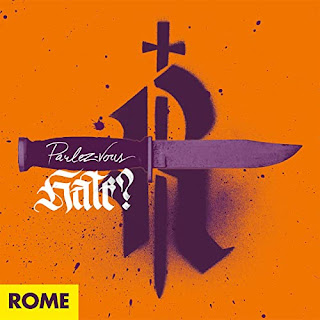 Long time fans might feel the neo folk project is selling out by not making the kind of bleakly obtuse that put them in line for Death in June's throne. It does seem like these songs were written with breaking through in the America. There is even a song that kind of parodies Bruce Springteen's "Born in the USA" But all the above works for me as it is very hooky and concisely written songs. "Death From Above" has a slight hint of country to it and is more upbeat than what you might expect. This song grew on me and it was also made apparent how the vocals have improved. Is there more of a rock touch to it ? Yes. If you just want a folk album then this might take some getting used to. It should not be hard as this is a great album and we are only a few songs in.

Things get more martial and darker with "Panzerschokolade". I am not sure how serious this song is if he is singing about having Scooby snacks . The song after this finds him getting back to a more familiar folk sound. This song highlights the changed in production which is much brighter on this album. He sings in his more resonate baritone here. I mean this is what he normally does so he is going to be good at it. It however seems like a step back into his comfort song and I was enjoying the change in direction. Acoustic guitar one again takes it's rightful place on this album for "Toll In the Great Death". It has a more swaying Irish folk sound, though there are also Spanish elements introduced. When we get to "Feral Agents" we are at the kind of risk taking I want here as it seems to pay off more often than not . There is a moodier tone to this one. There is more of a New Model Army feel to "You Owe Me a Whole World" .

That New Model Army feel continues on "Blood For All" which flows in almost a Cure like manner that I like but the lyrics asking where are we on the privilege chain , is heavy handed , despite the fact I can never tell what side of things he falls on, I would rather they just did not come up at all and we were talking about lost love , Satan or drug use. "Alesia"  finds him using his upper register more and it smoothly flows , as does most of the album.  I will give this album a 9.5 , so it might not be perfect, but it might be hjis best and I enjoy his songwriting here.