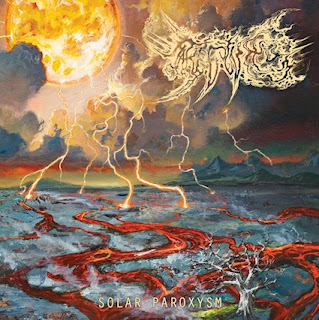 The fifth album from this project finds a more stripped down and direct approach being taken to this brand of black metal. More in your face . The guitars get aggressive. It does and doesn't sound like traditional black metal. This is what gives the song it's edge. There is a very sonic lushness to the over all sound. Despite the more straight forward approach I might like this even better than what I have heard from this project in the past. Does the song need to me 9 minutes long. Well no but it is done well. The second song picks up from the blast beaten path the first song left on. The only difference being the guitars are more harmonized. This song is not only not as impressive , but begins to bore me a little.

This is a five song album , but everyone of these songs crosses the ten minute mark. The vocals shift into a lower more death metal like growl on " Terra Requiem". Lyrically I guess there are still some cosmic themes. It slows and becomes more sonically lush. From a song writing perspective very basic, but the sound created makes up for this.  "Luminous Accretion" shifts from a sonic drone like the previous song had to more punchy thrash like riffing with blast beats underneath it. Lots of guitar solos crop up which is not the most common thing in black metal. The drumming is pretty remarkable. If the double bass is real and not programmed. A lot is thrown at you in this one, I am not sure that it is all cohesive.

The last song "Axtraxia Tunnels"  they lay on the speed to give the feel of more traditional black metal again.  After a few listens it grew on me more. The vocals sit back further into the guitar. There is a sonic wall of sound that I like . For a one man band this is impressive. All of these songs sound good , but not all of them stand out wit ha unique personality that once marked this project. I get being angry and wanting to do something more in your face, and the first song was a fine example of doing that well, it also was a bar the rest of the album did not always touch. I will give this one an 8, I think fans who want more of a black metal sound will be happy.This comes out March 19th on I, Void Hanger Records.