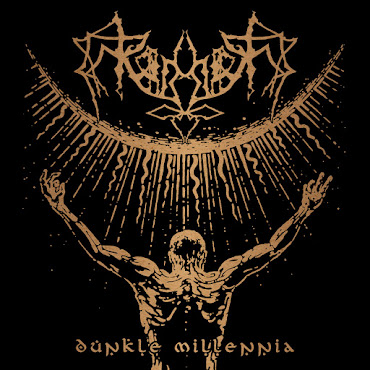 This German black metal duo's sound fall not far from Immortal in terms of sonics. They use things like clean singing to expand beyond being an Immortal tribute band. The harsher vocals are less of a croak and more of a caustic growl. They blend more traditional metal elements to create a more melodic song focused sound, rather than just hitting you with blast beats and this totally plays to their favor. On the second song I can hear how death metal is blended in the aggressive riffing that is not without it\s fair share of hooks. By the third song the more throbbing elements are set against some majestic thrashing. This does lead to more Immortal comparisons. Not as catchy as the first two songs , but still impressive. It has more winding twists and turns .

The guitars are more deliberate going into "Vergeltung" . The sung vocals have a raspier Motorhead feel. They throw some blast beasts in from time to time and that is fine. There is more of a rock feel to the song that follows this.  That is until they throw blast beats at you. The more galloped double bass parts just work better. The vocals switch over to lower more death metal like growl. There is a more traditional black metal feel to "Der Shutze" . The song after it though has a few catchier moments perhaps. The chord phrasing has that Inquisition like dissonance when they are not blasting on it. The chorus is catchy , but when they are not rocking that part they lean into blast beasts.

When the sung vocals play a larger role it serves the song well. The more mid tempo riffs also work better than the blinding bouts of speed. Not all riffs are created equal here, some are more epic and crushing than others. They use cleaner tones to shift the dynamics on the title track that closes the album. Overall what they do works. It is evident they care about the songs and while a little more straightforward than what I normally listen to it is evident it works and I will give this album a 9.