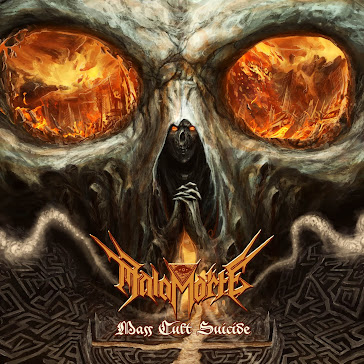 Since this is black metal History month, let's take a listen to a band that calls back to the earlier days of black metal. It used to be if something was satanic it got called black metal , which is why Mercyful Fate is at the forefront of the genre. The vocals are a little weird. The first song is heavier, where the second song works for more of a melodic groove. Sometimes he sounds like if Blackie Lawless was covering a Ghost song. He has more balls and rasp to his voice than Papa Smurfitus. When he tries to go into falsetto it is not a good move, he is no King Diamond. His voice is really straining on the verses on "Reverend" it sounds like he needs to lean into the rasp and belt it out a little more like he does on the chorus. He is a little pitchy if he is not in his raspier belt. This makes some of his reaching for notes tough on my ears. This is their 6th album so you would think the singer would have worked through this by now.

"Slaves of God" finds them falling some where between Mercyful Fate and the Scorpions. The keyboards help to darken it a little but it is pretty typical of the early 80s metal. Perhaps marginally more aggressive than the Scorpions , but not as heavy as Mercyful Fate. "They Are Watching Us" starts like solid metal from this era and then begins to bore me as it is a little straight forward. The chant leading into "the Temple" is more interesting. I would not call this sort of thing poppy .It does gain some grit to the guitar as it digs into the verses. This might be the best song of the album so far. Though the Judas Priest like touches to the title track make it a strong song as well. This voice gives it more of an Accept. But wait that is not black metal you scream. No but that is where it came from. Judas Priest influenced King Diamond for sure.

"The Witch " is the longest song though still under seven minutes. You can hear how bands like Emperor even drew from the style of music this band is imitating. I will round this album down to a 7.5 due to the shaky vocals . I think they did add a bit of their own touch to the formula they are paying homage to here. They have more balls than Ghost and are truer to the original sound this music came from .