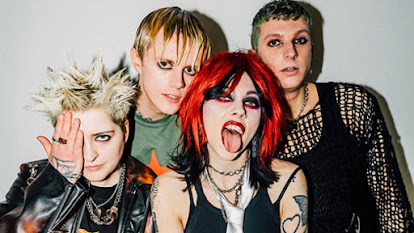 I still listen to their last album "My Mind Makes Noises" , and have been looking forward to this one. From the singles leading up to this albums release I was beginning to hear some 90s radio influence . When I actually put the album on it flows much closer to we heard from them without being redundant and still showing growth. There is less of a 80s Cure vibe. The album is still dark just in other ways There is more of a HAIM vibe instead of the 1975 feel of the first album/. Her voice is stronger on this album . She sticks to what she does though the moodier accents are smoothed out. She expands her gender preferences from the first album as evident on "She's My Religion", which is right on time for being relevant in 2021.
The best song on the album might be 'Easy". It has more in common with their last album sonically. It could have been on it. "Wish You Were Here" is not a Pink Floyd. It is middle of the road indie pop. It does not grab me as urgently as the first four songs. There are touches of the more Cure like guitar we heard from the first album. "Tomorrow is more Avril in the tension the guitar creates. It is the most rock song so far. There are some gender issues being explored and lyrically it seems they are going for more a woke theme, but the songs are good enough to flow around the lyrics. The rock guitar has a little more gain to it on "You Don't Own Me" , which is some girl empowerment when it comes to the modern anthemic themes.
The moodier 80s sounds kinda crop up again on "I Just Needed You" . The guitar going into has hints of Smashing Pumpkins when it comes down to the tone. The vocal is pretty smart and emotive. Her vocals can take a song like "Odd Ones" which is other wise bland and make it something worthwhile and catchy. They close the album with something that sounds more like 90s alt pop . Overall this album is poppier in a teeny bopper way and happier which makes it not as good as "My Mind Makes Noises " in my book, so I will give it a 9.5, as it fall just short of perfect while being a great fun album
Posted by Wilcifer at 4:54 PM