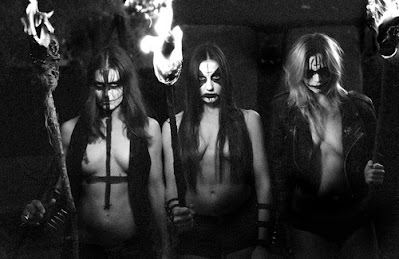 Black metal survived 2020. A year when hate was hated . Perhaps not as a prolific and dominant force as it once was. It is that time of year to venture back into the crypts to take another listen to some classics as well as see where black metal is heading so far this year. Before you get you little glue sniffing hopes up this doesn't mean that I am going to settle back for the next 28 days and be alright with blast beats for the sake of blast beats or ease up on the mandate that I passed going into the new year that I would asking more from black metal bands along with every other genre. The days of settling for tremolo picking and the same old same ole, are long gone. I want black metal that stands out from the pack. I want darkness, but I want to to sound beautiful, sonic and hypnotic.

If a band is typically described as raw black metal then chances are they are no longer going to covered here, even if I have covered them in the past Horna is about as raw as I want to go , if I want to hear something that sounds like old Burzum or Darkthrone, well I own those albums. What I will look for is new depressive suicidal black metal , which is one of the only sub-genres that I am willing to compromise on recording quality for, some times as older Cold World has proven a little rough around the edges works to create the atmosphere.

Since history is a key component here we are going to going to take another listen to some of the albums that influenced the genre even though they might not be what kids growing up these days consider black metal, but they don't know shit any way. Grab you lighters and spark up the lawns out side of the church in you neighborhood, lets hope for snow after all listening to black metal with the crunch of snow under your boots is the perfect setting. The world is going to hell and certainly deserves, so lets celebrate true misanthropy and slap on come corpse paint to praise the coming darkness for Black Metal History month
Posted by Wilcifer at 10:24 PM