Black Metal History Month -Sertraline : "The street light was all we needed" 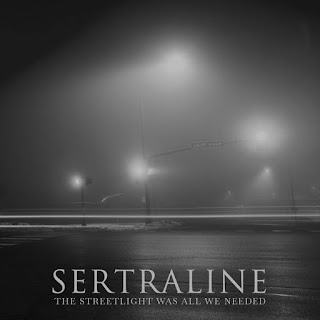 This highly atmospheric band from New York has combined a bunch of EPS and is presenting them in this format. I am counting this as a 2021 album because these were all unknown until this point. They have plenty of grit and darkness set against the more sweeping sonics. The vocals are a lower snarl. They are dedicated to making very dynamic music and not the kind of black metal that settles for blast beats alone. Going into the second song "Shade" they do pick up the pace and get kinda blasty, but I did not really even notice that fact until my second listen through the album as there is so much going sonically here. They bulk of the song is slowed into more of an epic mid pace. They are very dynamic songwriters so you are not going to worry about getting bored with these guys.

"Hounds of Avarice" is more layer with atmosphere though by the end of the song it explodes into a more typical style of black metal. "Knowledge of Trees" evolves into a hookier riff, though the blast beats have begun to creep in on a more regular basis here. They do not forsake their melodic songwriting sensibilities and coast gracefully through the rest of the song. Two minutes into "Entwined"  and it is business as usual until the song breaks down into a more melodic section. I am impressed that this is a atmospheric black metal band from America that is not totally copping from Deafheaven, in fact they might owe more to Agalloch. The drumming is really impressive, he even brings in some jazz influence. This plays playing is very well balanced. Metal has to have great drumming so if I make note of it then it is more impressive than most.

There is an interesting tension to the guitar that opens "Eyes as Tableau" .      The vocals are becoming less purposeful and more textures of snarling, but the music is so great on this one it doesn't matter, 'Their Cities" kind of feels like it could be one of many bands  gazing into blackness. The further into the song it progresses the better. They close the album on a more shoe gazing note and while it had been hinted at throughout the album this is the first time they really commit.     They do a great job of it and it creates another dynamic layer to the album. I will give this album a 9, the more conventional black metal parts grew on me.