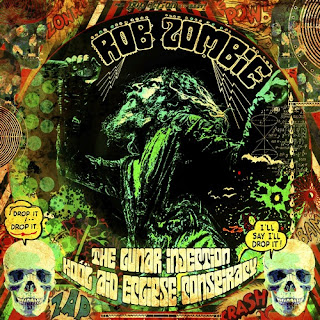 The first song is more metal than you might have expected from the more booty grooving brand of industrial rock he normally peddles in. In other words it is heavier than his last album. It is fitting that "Ballad of the Sleazy Rider" is more rock n roll based. Not full blown Steppenwolf, But close to that than White Zombie. Still more organic than a great deal of his solo work. They split the difference on "Shadow of the Cemetery Man"  . It is very much what you expect from Zombie , but so safe it is just a happy middle of the road. Thins take a much more jarring turn on the country flavored "18th Century Cannibals..". It almost feels like something the Revolting Cocks or the Butthole Surfers might do. It does get more industrial as it progresses
He steps on the gas for "|the Eternal Struggles of the Howling Man" .  It is heading in an almost thrashing direction. Ginger Fish from Marilyn Manson plays drums on this album and he is pretty impressive. He play way better than anything I remember him doing with Manson. "The Satanic Rites of Blacula" is not as inspired. It is not a bad song it is just what you expect and nothing more  "Shake Your Ass Smoke Your Grass" is the kind of anthem that Marilyn Manson would write. Coming from Rob Zombie who does not do drugs it is a little odd , but it is a good catchy song so I will take it. The more I listen to it I can hear how it is Manson by way of Alice Cooper who was an influence of both of these guys. Once we get to "Boom Boom Boom" the album begins to take a darker more interesting turn.
"Get Loose" is fun, not the strip anthem that say "Living Dead Dead Girl" was but it shows he can do what works for him , and sticks to his formula without just dialing it in. The best song on the album might be "Crow Killer Blues" as the riff is not only the heaviest on the album , but also the darkest. Not sure why it took things this long to get creepy but glad it finally did. I will give this album a 9, it might not be his best work, but it is certainly better than the bulk of albums coming out these days from the more mainstream side of this spectrum.
Posted by Wilcifer at 9:42 PM