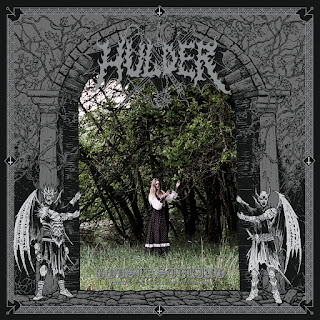 These guys are getting a lot of props from the metal press these days . This begs the question is the hype worth it ? The first song is pretty good. They care about song writing, but on the second song they clearly locked into a more thrash influenced vision of early black metal. 'Sown in Barren Soil" is some what death metal in it's aggression and the vocal delivery, There is a melodic side to it that balances everything out. It took me two songs before I learned this is a one woman band from Portland. Now the hype makes sense. Also the quality of her androgynous snarl. She would be growling lower if she could. The fourth "song" is not really a song and more of a interlude.

"Purgations of Bodily Corruption" is a triumphant gallop. Now that I know I am listening for a girls voice I can not unhear it. "Lowland Famine" coasts before going into blast beats. The drumming is pretty simplistic even for black metal. I do like the very organic sound this was recorded with . It is not too raw as most instrument are well mixed and have clarity. Then clean singing on " A Forlorn Peasants Hymn" .is far from the operatic grace of Mykur, but there is that kind of folk metal dynamic.

The last song finds her indulging  in more triumphant Bathory like ride into battle. We hear more of a varied growl from her after things speed up into a more traditional black metal manner, It's fine and that is something that can be said of the entire album. It sounds good, there are hooks and like I said before they do care about song writing. It is not very middle of the road, I do not feel darkness from, it is like faking the funk. I will give this a 7.5 better than not , but nothing new or ground breaking.