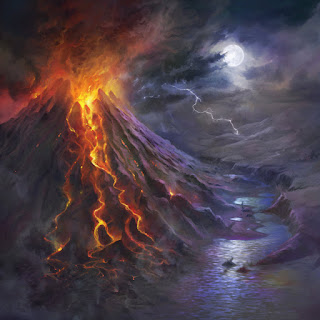 There are some thing s that are a little confusing here. This is a one man black metal project or at least that is how it is billed. But Rasmus brought in a session drummer and vocalist. So it is one dude playing all the guitar and bass. He also wrote the songs. I mean it's a band , this guy just has control issue and perhaps commitment ones as well hence not just saying these guys are in the band. I mean having a band is nothing to be shamed of. This album benefits from it. If he tried to tackle all of this by himself, I do not think it would have as organic of a sound as it does. Slovakia is where the Hostel movies went down and Ultron threw hands with the Avengers not sure if it where I expect majestic as
black metal to come from, but here we are.
There is more of a Swedish feel to the second song. The vocals fall back into the guitars. Lots of galloping against the blast beats, which are not over done at this point in the album. The third song buzzes like the electricity in the air as a storm builds. It has a more throbbing drone . Then it becomes one of those things where I get lost in the tremolo of the guitar and it creates a hypnotic white noise similar to some of the earlier Darkthrone albums. There is some melodic guitar going into the fourth song and then I get lost in it and the next thing I know two songs have passed. This means a couple of things , one of them being that the songs start to sound the same as I can no longer tell where one ends and the other begins. The other the atmosphere is thick and effective, but here we get into that sound vs songs thing. They are a little angrier on the 5th song but nothing makes it stand out.
The album started off strong then kind of of fell down the road many black metal bands do where they pour on the speed  and create a vibe , but do not write songs that catch you. Overall these guys are good at what they do and the album sounds great. This kind of black metal , is a been here and done that , got the black t-shirt sort of thing, but they are good at what they do and if you only want a sound and ask less then this album is for you and is well done either way, so much so I am going to give it an 8.
5.7
Posted by Wilcifer at 7:06 AM