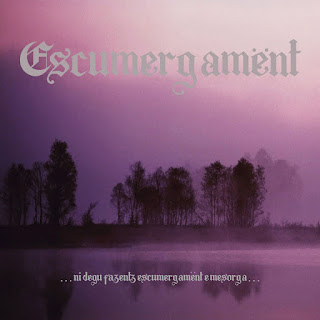 This is the debut by this Swedish black metal force that includes former members of Setherial in it's ranks. When one thinks of Swedish black metal Bathory and Dissection both come to mind. These guys are dark but I guess if they had to swear allegiance to anyone there might be a more Dissection influence though they are not as overt with it as say Watain, who has taken that sound and made it into something their own as the years pass. Cavernous is one word to describe where the vocals sit in the mix, the guitars are at the forefront. Synths add more to atmosphere here. The dark mood might win me over the most. I like the throbbing drive of "  To Envy the Corpses" . They speed up into more of a the typical black metal thing which the scowl of the vocals helps with. I like how the guitars accent the blast beats on this song as they do not follow the standard tremolo pattern but more staccato.

I am a fan of anytime you can hear the bass in black metal as it often gets lost in the murk, so when it becomes the back bone of the 3rd song I am here for it. They are more dynamic , but in terms of the arrangement the execution is a little disjointed as there is not a smooth flow. With " I Sang of Murder" I am impressed by the commitment These guys are not impervious to the fact that when ever they launch into a blur of blast beasts they are going to sound like every one else. One thing I like about this album is black metal no longer conveys the icy feeling of emotional anguish and coldness it once did. This album recaptures that feeling which was more common 20 years ago. Like most black metal bands sometimes speeding up feels like the easy way out, but they maintain a nice dark mood.

,Depressive black metal is a sub genre I like the most. These guys convey that without any crying or being overly dramatic . In fact it is the guitar that cries out in the shadows. They close the album with a song that not only does this but hits most of the other notes fans of black metal might want.  I will give this album a 9. It excels at capturing the atmosphere and mood I want from black metal while retaining some balls .