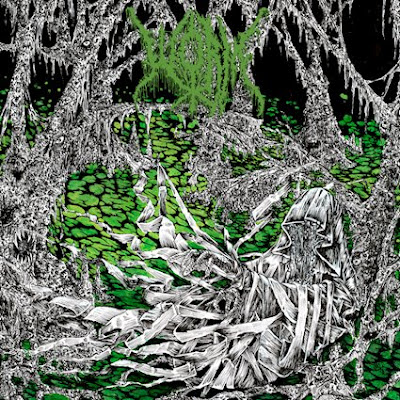 This album does not come out until next year so this is the shap of doom to come. Production and equipment are never my main concern as they do not write songs. I have complained this years about bands that have sounds but not songs. I think the reverse can be true you can have songs but if you do not have the sound it can be also problematic when it comes to getting the point across. This band has a very thin guitar sound. It might worh for some music , but doom needs to be dense. This band does still have some things going for it. I like how dark they are. I like the creepiness of the part dark parts. I think they will not rise from where they are without spending more time dialing their sound in and getting some old vintage cabs that sound good. It sound like they are in high school running distortion pedsl into a practice amp. Volume is doom's only friend.

By the end of " Rotten Spheres of Sentiment Black" the guitar sound does improve. The vocals sound almost black metal in some place. Typical they are either a Gollum like snarl or a low death metal tone. The drums sound pretty good. The vocals are present in the mix, so why they cut corners on the guitar I am not sure. They are riff machines and look into some pretty cool death metal like chugs. This guys double bass is also on point. Drums are normally where some doom bands get to cut corners because of the tempo they are playing at , but not this guy. The solo on " Apparations of Gloom" make it clear these guys can play their respective instruments. I am not normally one for guitar solos but this one is good.

By the time they get to "Melting into the Necrosphere" the guitar sound fine. Granted on this song they are playing something much closer to death metal than doom. They do return to a more doom oriented sound for the last song. The guitar is creepier like it was earlier in the album. At 11 minutes it's the longest song on the album. There is a great deal of death metal stomp to this one, but it is balanced out with moments of atmosphere. Due to the production of some of this album I will round it down to a 8.5, but it's pretty impressive for a duo.