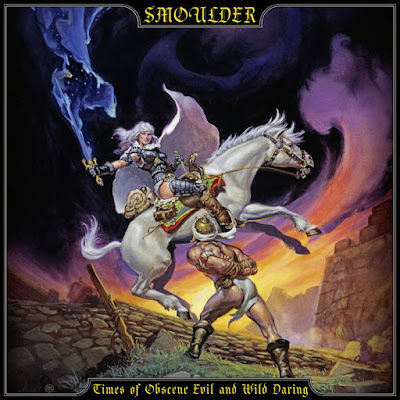 This is the time of year when end of the year lists start trickling out and I have  the chance to find bands that flew under the radar and did not catch my ear earlier in the year.  If a band claims  on it's Bnadcamp to be influenced by Solitude Aeturnus the stakes are high. These guys could just be slow power metal or doom for people who like power metal I am hoping for the latter. The production on the drums could be better. It seems the vocals got more love . I like the effects on them, they give her a little more of aggressive edge. Most power metal is too happy for me, but these kids bring it with a darker shadow to their big chugging guitars. The vocals work, though are generally not super hooky, with the opener being the exception to this rule and  one of the album's strongest songs, if not the strongest. I would have been fine with things keeping a Holy Diver level chug.

"Sword Woman" grows on me by the second listen . The chorus is not as strong as the first song, but still works .The thing that could be a sticking point from this band is when the sped up they sound just like all the other bands longing for the 80s. There are a few moshy riffs, but the rule here is cool riffs alone does not a good song make.  The album got off to a good start , but there is something kind of awkward about how " Voyage of the Sunchaser " is written  This feeling comes and goes as the album progresses so I had to take a second listen to the album in order to find the problem.  There is some dynamic ebb and flow. The awkwardness might lie in how they play the more uptempo sections that are more like Paul Dianno era Maiden. After a closer listen the bass playing is kind of clunky and very forward in the mix , this could have been smoothed out in production. 'Shadowy Sisterhood" is better as it's more deliberate and darker. More power metal than not if Iron Maiden is the barometer we are using. It is the next best song after the opener.

There is something kind of disjointed to "Black God's Kiss" they sound like they could be any local band playing a Saturday night battle of the bands . The riffs are thrown together without telling a cohesive story from which they flow. I will round it down to an 8. They do not suck, but do not belong to be  on  any end of the year lists. Maybe their next album if they get a new bass player . I know i can be a hard sell on this sort of thing since I was around when the bands they are influenced by came out. I can see young kids being impressed, but I did not think Decibel was hiring underage writers.  The argument that they are good for Canadians doesn't work either.