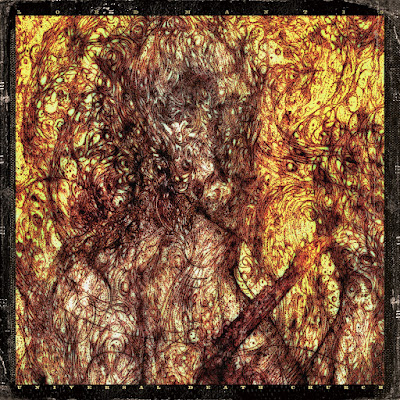 There is still some pretty fucking great music coming out this late in the year. Here is a prime example why I am hesitant to really into into my end of the year lists until December. There was a time when I might have considered these guys to be a wildly feral sludge band , but from some of the chugging on this album it feels like they making a turn towards  raw and nasty death metal. Raw doesn't mean  the production is intentionally shitty for effect. In fact Sanford Parker who produced the album made some interesting choice on what he choose to to with the vocals on the opening track which is more unrelenting than the second that offers more clarity in it's mix. There is more of a thrashing sludge attack in the chugged riff.  At times this reminds me of Parker's other project Minsk. Though darker and uglier though this time around there is an undeniable weight to the sonics .

They are able to twist this into some more melodic moments that recall earlier non- progressive rock Mastodon. So in this way they straddle the line between sludge and death metal."Consciousness exe' is more deliberate. This song also provides of a good example of the kind atmosphere I could hear some one mistaking for black metal. It does come close to a band who might have been black metal but was influenced by other types of  modern music like say Nachtmystium. This album is much more experimental and diverse in the dynamics than previous efforts. There are some great drum sounds on this album bolstered by the great playing. The vocals production is great as well as the textures brought on by the effects coating the vocals brings out a more aggressive feel to the already poisonous performance.

I like the shift in sonics of " Low Entropy Narcosis" . The needed changed in guitar tone, but it seems to drone in one place and doesn't actually develop as a song so it is more of an interlude. "Damocles Falls" has a much nastier tone. There is an intense sonic side to this one.  The enraged chant of kill yourselves is the best part of "Flesh world". It does take a darker shift in it's mood and leans away from the straight up hammering. The bring out the saxophones for "Hole" to close the album. I like the slower pulsing throb of this one. It works off this droning throb with out any significant shift. This is a very solid return for this band I will give this album a  9.