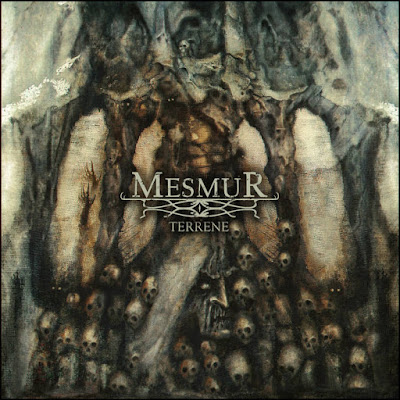 I like the angular edge this disjointed and dissonant guitar sound invoke in the first. The vocals are the kind of gurgle you expect.  This is the band's third album. The first two flew under the radar. I am beginning to see a trend in this genre where the drums are mixed low and now given enough balls. Otherwise the production is great. At the ten minute mark this could have just been another song rather than forcing this one to be 16 minutes, it is not like it really adhere to the song 's theme aside from slow and heavy once coming out of the melodic break. I am all for dynamics as long as they are smooth and natural.

At 11 minutes "Babylon" is more conservative in it's sprawl. It is maybe a few bpms more up tempo, but only a handful if that. There is a flute in the layers of guitar. The growls do have a form and function and are not relying on the guitars to survive. The problem occurs at "Eschaton" which in it's own right is a decent song with some interesting sections and a cool melodic part at the 9 minute mark, however as a whole this album becomes a atmospheric lull that drones together . It was not until I was at said cool melodic part 9 minutes in that I looked up from my computer so see we were at a new song. When I went back and listened to it again I heard that this is one of the album's strongest songs. Ok of the four.

The last sogn is more like the first in the angular guitar riffs that do not connect but still managed the odd flow. I think stronger drum mix would benefit moments like these. When the more straight forward doo metal guitar lumbers up from it's pit to take over the sogn pretty much finds them falling in line with all the other funeral doom I have heard over the years that keeps the unhappy medium and follow the herd rather than the greats like Lycus or Evoken who reach for something grander. I will give this one 8. This is better than most.  A solid effort that will please fans of the genre. This places these guys on the second tier and not on the same footing as the Esoterics or Mournful Congregations of the world.