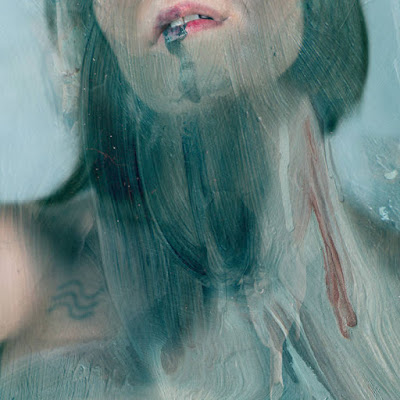 This is doom in the same way Chelsea Wolfe touches on it, but even more so and even more depressing. At first I thought this was going to be another person jumping on the Chelsea Wolfe band wagon. There are similarities  after all , it is a woman playing dark heavy music with depressive overtones.  A more doomy version of King Woman might be a more fair comparison. She does go into her head register more so I suppose the ghostly way in which she does this is more like Chelsea.The intent of her much in the dynamic swells seem to be more sonically doom oriented, The production is less dense than say "Abyss". When it gathers steam I can also hear PJ Harvey intentions. Her voice wavers more almost like the singer of Gold. Not intentional hooks in the song writing approach, but more drive than what I would consider drone.

It does get into some  drone . The song 'the Hunt" falls into such. The distorted guitars clunk heavier on the song after wards, but experimentation begins to over shadow songwriting. We get more into sounds. It breaks down to fragile folk, though in Italian everything takes on a more classical feel. It is also the most Chelsea moment so far. "Death and Orpheus" picks up the pace. It would be interesting , but it is another moment that almost sounds too much like Chelsea Wolfe for me. the Guitar sets apart as beign more post- rock. It is more sonic yet minimal. I find myself starting to listen for the moments that do not sound like her or attempt to as those would be more unique. There is more of a pound to "the woods the wheel" . It has more of it's own sound, she is singing in a more ghostly manner but its pretty much  put in a different context. The guitar is a little more post rock in its approach. It is almost more like Brutus in the heavy way it pounds.

Things get more atmospheric for the title track that closes out the album. Midway into the song it takes a darker turn in the plodding beat. The album Jarboe did with Neurosis is a fair place of reference to this album.  I will give this album an 8.5. I like it for what it is , I am not sure how many repeat listens I will get out of it despite noticing that it does seem to grow on me with each listen. Think just off  the influences I listed you can decide if this is something for you. Not the most original , but heading in the right direction,. /