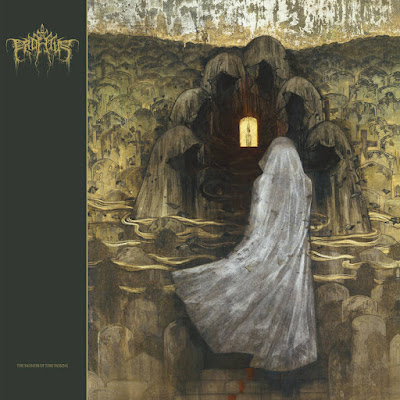 This Finnish band has always been one of the heaviest funeral doom bands. This time there is way more funeral as  the keyboards open the album " The production dialed in a  warmer more organic guitar sound I can tell I am going to like this new Profetus better than the Slow album I had to give a rest as it was putting me asleep as I was trying to write. While less riffy than Loss' newer work, they work off delicate guitar melodies  that haunt you. The vocals are similar as they are a low rasp, but not as low of a gurgle. Without sitting down to listen to this it can sound like these songs are running together and everything sounds the same. It took a second listen to this album before they really stood out. The second song the vocals are spoken in a low voice and there is lots of monks chanting, so sounds like an evil church.

The 3rd song finds the organ more prominent in the mix and the guitars playing subtle melodies. I think the bigger organic drum sound helps set them apart."Northern Crown' finds us back in the creepy church again.  It is just spoke word and pipe organ. Six minutes in a ghostly choir like vocals leads us to when the metal crashes back down. The last song begins just as "Northern Crown" before it. Tine does pass when this song plays , but I think the Sadness of the creepy church would have  been more truth in advertising. There are more grandiose swell than sorrowful mourning. The drums pick up a little as the song progresses. Far from being death metal of anything of the sort, though I can appreciate an adherence to doom.

"Tiamia" might have taken them in a more metallic motion, but all in all these songs do not shift much for the model of what this band does  They are good at what they do. What they do makes me appreciate bands like Evoken , Esoteric & even Mournful Congregation who write songs that stand on different legs rather than being one frequency. The frequency on this album does find the band progressing and growing. I enjoyed listening to this album , but I am unsure how much I would return to this records outside of what I have already heard. A good records is separated from the  great records as it does not emphatically meet the question of would like to listen to this again or do I need to listen to this again with a excited need. I will round it down to an 8.