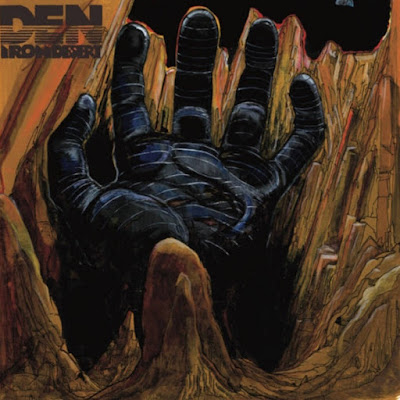 Riding the line of sludge and doom, these guys throw some pretty creative stuff at you, despite the vocals being the kind of coarse bark that more typifies sludge there is enough darkness to their lumber to belong here, though more punk sensibilities to their sound than what you are normally going to find in any kind of doom . The do blast in with varied tempos , but it returns to the lava flow of their normal burning pulse. The verse to the second song is darker and more doomy with the dynamic shift that follows more of an explosive noise rock thing.  Here it's doom colored by more of a Melvins influence. There is more of a dynamic shift here, I like this one better than the opener which was till a pretty solid song.

"Svalbard' is slower and resonates off of the fuzz with an almost analog synth vibe. The vocals are more growled here, but have begun to get a little stale for my tastes as they are a one trick pony.
"Taste of Blood' has more of a back woods boogie set against the more Black Sabbath like pacing. The vocals here are howled more like Black Fl;ag era Rollins. "Bones & Flies' is a great deal darker. It almost has more of a Neurosis feel. The spooky atmospherics are cool as they add a nice dynamic to the album as a whole. The title track that closes the album, has the more coarse husky vocal. The bass is booming a fuzzed out tot he max. I like the tempo they are pounding this one out at as it has a great deal of groove. I begin hearing the hints of the more Rollins like vocal again. The song takes a really unexpected turn somewhere between kraut rock, dungeon synth and tribal drumming its way into more apocalyptic sludge. There is plenty of noise to add angular abrasion.


I really like the sense of dynamics and the more melodic elements these guys use. They are much better than avaerage song writers. My only complaint is the vocals .The get old quick. My hope for them is in the future they employ more vocal colors as it would take their songwriting to the next level I will give this album an 8. This album is being released on Corpseflower Records.
Posted by Wilcifer at 7:05 AM