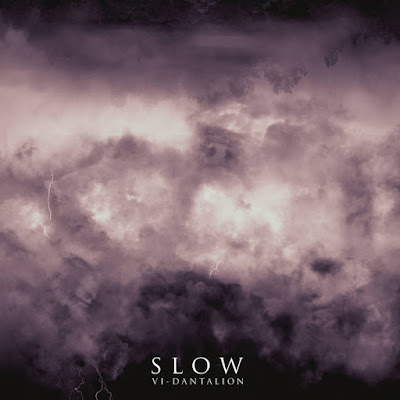 When I first started reviewing this album I had vowed that this along with  Profetus would be the will be the only crushing funeral doom album I cover with this kind of gurgle vocal, where the dense slabs of dark guitar seek to bury you rather than really write a formal song.  There have been others . Some better than others. It is a case of a sound being more prevalent than the writing of songs  that  that could work in small doses.  I say this about many extremely heavy band, you might wow me with the first song off the sheer heaviness of what you are doing but after that I am going to ask, "But can  You write a song?" The main shift is in the passing dynamics that are allowed to soar into a grandiose place with a huge sound. This band from Belgium is great at big sounds.

By the time we get to the 3rd song everything is sounding the same to me. The vocals sound like they are being scraped from the back of his throat. Going into the 4th song after taking a break from this album, I am returning with fresher ears. The piano part does break it up, Much like the Mesmur album I also reviewed today, when they do these kinds of break downs I think this would be better served as the intro to a new song. Granted this does bring the contrast to make it feel like the punch back in is heavier. The first powerful riff that resonates with me is the march of "Lacune". It does pick up the pace, but I think that is the change this album needed as it does not sacrifice any of the ominous mood.

"Incendiarie" goes to some beautiful places that pulls them from the standard crushing drone. It almost reminds me more of symphonic death metal. The last 'song" is a symphonic ambient outro. It has some great moments and it's a band I wish they were more song focused and less into the sound. It sounds great but falls into the pit fall of the genre . If you however are really into atmospheric funeral doom you might dig it.