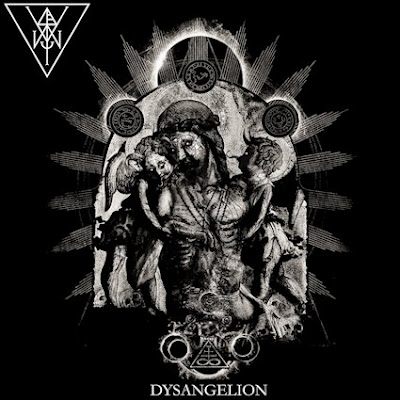 This German band takes an interesting route with funeral doom. The fact that these guys might not create the most mournfully melancholy music is counter balanced by them being  dark as fuck. More dissonance than most funeral doom. There is something ugly beneath the surface of their sound. The vocals are largely in a low guttural growl with the some whispered moments. I like the fact they can still allow the song to move and do not have to creep along . The guitars are not as refined, in fact their is something a little rough around the edges. Te drums might have the rawest sound .Some of the guitar layers are more refined. They are more focused on songs than a sound, aside from capturing the sound of the genre as a whole.

There more spoken vocals on "Fire Tongues Sermon" . The guitar solos are a mixed bag .There are some zany Slayer like moments in them. There is an interesting atmosphere to both their sound and songs. Sound as in how they perform it , and songs as in how they use what they perform. I do like their sue of guitar solos. Sometimes it feels like the double bass might be more of a default.  The longest song is the 11 minute "Paradigms Beneath the Malefactor". Which for funeral doom, is a pretty respectable length. There is one almost four minute interlude that sound effects and whispering. The drums could stand to come up way further in the mix on " On the Eucharist it Shines" . The more croaked vocals become more of a thing. The song after this seemed like an extension of this one until maybe mid way into it. It does have one of the better guitar solos for what that is worth .

Does this album sometimes slip into a sound and the songs become hard to tell apart, yes though thi is the exception to the rule . There are many reoccurring themes sonically, double bass and whispered vocals being two of the most frequent offenders. Could this album have used some more love in the mix? Yes But what sets this album apart from many of the other extreme metal release I come across on any given day , is how the guitars are layered and how it breaks the rules when it comes to funeral doom and it works rather than just playing it safe, for that reason I will give this album an 8.5 , just released on Moribund Records.