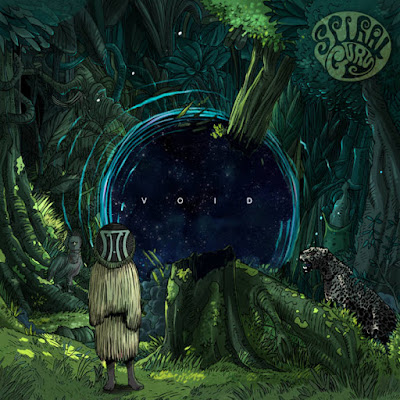 All the chick dig doom. Yet another female fronted band that falls somewhere with in the bounds of the genre. This band from Brazil is more focused on getting groovy. The formula in play here is pretty obvious . It goes as follows.  We break down into a palm muted groove for the verses when she sings. We throw in some hints of  our Sabbath influences, but do not go public with them until it's time to build back up. Maybe on the second song we might start jamming. Her voice is what keeps these guys from leaning too far into a Sabbath direction. In fact it gives them a more  rock n roll feel as a general rule . I am also not going out on a limb to guess they smoke a shit ton of weed. "Oracle" has more of a Blue Oyster Cult thing going on than Sabbath. It's more up tempo and straight up rock n roll. The jam around on "Mindfulness" . Some of the fat could have been trimmed to make more time for some of the riffs they have going.

There is more straight ahead rock to "Virtual Horizon" . Things begin to get more psychedelic once we get to "Empty Space". For these guys that also happens to mean darker. But this is more of an interlude than a song. They get back to more of the brooding tension with "Time Traveler. There bassist realy steps up to the plate on this one. "the Showcase of Dreams" starts off in a slower darker  and more blues based place, not unlike the first Black Sabbath album. The vocals are given room to wander , but stay pretty close to home.The last song has more of a stomp to it, but it offers no real surprises and holds the status quo for the genre.

These guys are really good at what they do. I think the hookiest and most infectious songs were at the beginning of the record and they slowly become more jammy as the album progresses. Even their filler is still pretty solid. There were no songs that I wanted to just skip past. I will give this album an 8.5