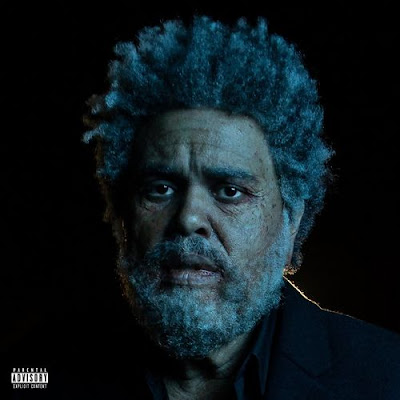 The 5th album by Tesfaye finds him hovering in a synth wave direction not unlike what he did with the last album. To his credit he does employ a little different vocal approach on the verses to the first actual song. "How Do I Make You Love Me", finds him coasting on familiar futuristic grooves that take less chances than he did on the first song.  I know I am never going to get him to go in a direction as dark as "House of Balloons" again, so I am just asking for the shadows of "Starboy" disco, instead we are getting upbeat fragrance counter muzak . I am ok with this even up until "Take My Breath" which as formulaic as it finds him settling still works as a song.

This all goes down in a much less offensive manner than what happens on Lil Nas X's "Montero" album it does highlight some of the problems with the pop music hit making machine of today. He is one producer shy of Lil Nas X's 15, for a frame of reference, Pink Floyd's "the Wall" has two not including David Gilmore and Roger Waters. he also has only had a handful of engineers compared to the 23 that works on "Montero".  You would think the more songwriters an album has the better it would be, the more the merrier and all, well he beats out Lil Nas X with a whopping 27.  By the time we get halfway into the album it is clear this is not the case. "Sacrafice" still holds my attention with its more organic feel. The production does have this as sleek and plastic as you could want pop music. "Out of Time" however sounds like something Quicny Jones has the good sense to cut from " Thriller".

Jim Carrey's DJ narrations were done better on Queens of the Stoneage's "Songs for the Deaf" album.  Once we get mired down in ballads things really go south. I am not opposed to him doing ballads, we have just gotten better from him, so why settle for this boring clock punching.  I am still rooting for him to redeem himself on "Best Friend" as the syncopation takes more chances than your normal color by numbers pop. The self-help cliches that color some of the lyrics clue us in to the fact that perhaps he is not doing drugs in the same way he has in the past which is giving a silver lining to the songs that keeps him from being as soul wretched as he was on his better material. His smooth jam ability flies better on "Is There Someone Else" . "Starry Eyes " feels like a much less interesting continuation of the previous song and makes you wonder how all 27 songwriters were asleep at the wheel on this one.  If the vocals were not spoken on "Every Angel is Terrifying" it might have been a pretty decent song instead of an interlude.

"Don't Break My Heart" finds him taking a few more chances and keeping total disappointment at bay.  He falls back into his comfort zone with "I Heard You are Married". It's not boring like most of the radio so it works for what he is trying to do here. "Less Than a Zero" has a 70s post-disco feel. It is better than the bulk of the songs on this album. I think an 8.5 is a fair score for this album, making it the lowest scoring album thus far and I have been reviewing his work since 2015. If you were going to call it a sellout you are in the right direction although did have double digit producers on "Beauty Behind the Madness " you can tell he had more passion for his job then as a factory worker.

Email ThisBlogThis!Share to TwitterShare to FacebookShare to Pinterest
Labels: 8.5, pop, The Weeknd