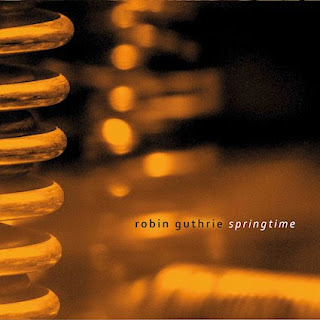 One of My favorite guitarists has marked his 60th birthday by releasing a new album. This is an instrumental effort that is not far removed with his work in the Cocteau Twins. It floats like something from a David Lynch soundtrack. I would be down for him doing an album with Juliee Cruise. The first song is high ambient, aside from the opening notes that are allowed to ring out the textured guitar blends more with the synths on the first song.  You do not hear the more classic Cocteau Twins sound shimmer out from his guitar until the heave kissed notes float through the sonic clouds of " the Faraway". Much like I said with Johnny Marr's newest solo albums these artists work will always be measure against their past glories. If you know Guthrie's name you are not clicking on this not because of Violet Indiana, but because of the Cocteau Twins.

There is a dreamier drone to " Another Part of Nowhere". I found myself having to back and listen to this song a few times before it clicked, and I was able to think of it as a composition that stood on its own two feet and not just a movement in this atmospheric symphony of sorts. It hangs on a single note melody, not unlike some of the Coteau's earlier work. This is all pretty bright mood wise, sure I can hear drifting off upon a silky throb of narcotics to this, but there is not a fey land wonderment without Elizabeth's voice on this thought for what this is it is an easy listen and pleasent on the ears.  Not fitting neatly into being dream pop, shoe gaze or post rock the sounds here will still appeal to fans all of those sub-genres.

The last song is more synth focused at first. The drum programming is what shifts the dynamics as things get more dense sound wise. There is less clear-cut melody and more experimental bending of sounds. Until perhaps the last minute of this song. I will give this a 9 for all the reason that I have previously stated this works, Chances are when I am in the mood to listen to this sort of thing, I will just pull out my Cocteau Twins albums, but for what this is and given the current state of that band I am happy with this and think fans of his work will be as well.