A Place to Bury Strangers : " See Through You" 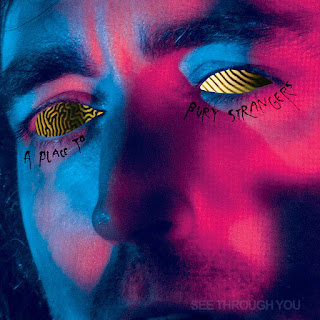 Before the current wave of post punk revivalists were a thing this band was at it. They continue to be more experimental and put together a rather bleak tapestry of sound. It gets darker as it progresses. The opening track being more accessible than the cavernous catharsis that is "I'm Hurt". The vocals are cold and detached through a filter of reverb. It drones with guitars makes catching scrapes to your ears. i can hear equal amounts of both Throbbing Gristle and Love & Rockets influence here. On a song like "Let's See Each Other" even some Wire and Suicide, in the jammy amble of angular guitar tension. Not as loudly abrasive of what I remember these guys doing. This would transition well live, though once onstage this band has always cranked up the intensity.

Where they would have normally weaponized feedback and noise on a song like "So Low" the drums help pull things together and keep them moving in a more song-oriented direction. Distortion coats the vocals and the bass on "Dragged In a Hole" to create something very heavy in the sonic sense. Though so blown out it drowns your speaker in the sound. There more electronic elements on this album though when they hit you with the dense pounding like "Ringing Bells" you almost do not notice.  I prefer the more deliberate despondence to "I Disappear" than the new wave pep in the step of "Anyone but You". Not tht there is anything wrong with the latter, I just feel the pound of the previous song more.  I really like the subtle melody lurking in the dense shadows of "My Head is Bleeding".  With the hazey production of shoe gaze, but more often than not at more of a punk tempo the noise and weird is typically more balance than not.

The bass playing on this album often steals the show. "Hold On Tight" is the most straight forward song on the album that is more like 70's outsider rock. A melodic Cure like feel comes over "I Don't Know How You Do It". The Jesus and Mary Chain is also a fair frame of reference with this album as a whole when trying to pinpoint the sonic zip code. Though on the weird closing track there is very little of that kind of thing. Not the album's catchiest song, but it works for what it is. This album sits in good company with the rest of their legacy without coming across like they are punching the clock in any way. I will round it down to a 9 only because some of the more abrasive sonics might make this an album you have to be in a mood for, but the execution is excellent. This album drops February 4th.

Email ThisBlogThis!Share to TwitterShare to FacebookShare to Pinterest
Labels: 9, A Place to Bury Strangers, post-punk