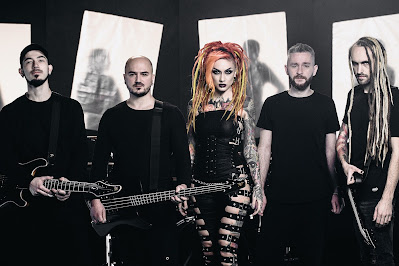 Falling in the modern metal spectrum of metal core, djent and nu-metal, this band from Moldova blends the elements well. This is their 5th album, so they have perfected both their melodic side and their denser more aggressive one. Bands like Jinger and Spirit Box have made impressive names for themselves by creating metal in a similar zip code, but on the opening track I am hearing a big more symphonic sound that owes more to Within Temptation when she soars into clean vocals. I think at their heart they are more of a metal band than those two bigger name bands. When clean vocals appear, they are pop oriented in their hooks. The second song opens with more simmering darkness until they begin to dish out the beatdowns.

So far the closest they get to having a sense of pop hooks is on some of the syncopated sung vocals found on "Longing". Another interesting element is when you take the metal core moments into consideration there is very little on the hard-core side of that equation. They never feel like tough guys setting you up for a break down. When it comes close to that place sonically like on "Goodbye" there is more of a nu metal bounce to it. There is a constant shifting of riffs. They never try to jerk you around with these tricks. Her voice drops down into more of a purr for this song which works well. "The Realm of the Dead" is dark enough with the grind of its riffs but finds the band settling into more of a formula, even amid the chaos of their arrangements. "Everlasting Lethargy" takes unexpected turns that pay off.  "These Walls" continues to find the band making interesting choices in regard to where to take things like melody.

Sometimes the choices they make fall more in line with a progressive direction. Some of this is thanks to the drummer. The guitars do not take up much time wanking around. Mood is important even when she is screaming at you in a hostile manner. They are subtle songwriters who hit you with a huge sound but balance it out with cool little haunting sections. Regular readers here know this sort of thing is not my normal go to when it comes to metal, so for it to be pulled off in a manner that catches my ear says something.  The flux of the vocal is not a predictable good cop/ bad cop thing. Is it perfect in its heavy-handed battery of your ear drums that is executed like a machine at times? Well, I think they pull off what they intended to. This drew me in, more so in the melodic moments, as that helped even the spectrum this album falls upon in the blend of modern metal at hand. With "Nine Ten" this is more ambient than expected, but still works.  I will give this one a 9, much better than expected.